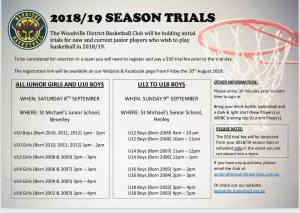 All players who trial are required to complete an online intent to play form, it can be found at https://membership.sportstg.com/regoform.cgi?formID=59228.

A $50 fee is required to complete registration. This payment is nonrefundable even if you later decide to not play for Woodville. The trial fee will be deducted from your 2018/19 fees or refunded only in the event you are not placed into a team.

Following the trials coaches will meet to decide their teams and all players that have trialed will be notified.

Non-selected players will be given feedback as to why they were not successful in gaining selection to a team and given advice on the areas they need to develop.

Failure to lodge an Intent to Play and pay the registration fee will result in the nominated player(s) not being considered for squad selection.

ALL JUNIOR GIRLS AND U10 BOYS

Please arrive 30 minutes prior to start time to sign in.