Saturday 6/8 vs North - We Honour THE WARRIOR! 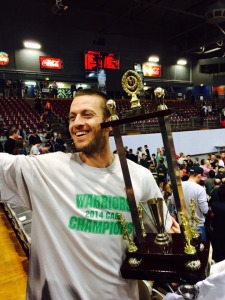 SATURDAY 6/8/16, Get to The Castle as the club Celebrates one of its home grown son's!

It is with great pride, that this weekend we are able to honour one of the clubs GREATEST EVER! A true champion of the club, A leader and someone that truely BLEED's GREEN.

Prior to the men's clash with North, we will be retiring the no.15 of Cameron Wilson!

As most know, Cam has been a Warrior since juniors and has been a club leader on and off the court for years. He is up there as one of our most successful players to have ever pulled on the a Woodville uniform.

Cam has a long list of acheivements playing for the senior ABL/Premier league team, some of which include:

The ONLY Warrior to play in ALL 3 Senior Mens Championships

Please, If you are going to get to any game this season make sure that it is this one, as the club shows its love and appreciation for Cam and thanks a favourite son for his efforts representing the club, over so many years!