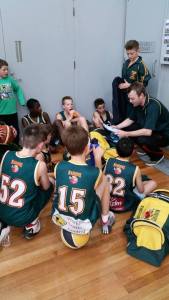 The National Junior Classic was held over the June long weekend at MSAC in Melbourne.

The Warriors U12 Boys team qualified for Classics by finishing first at the State Championships held in May.  It is a very strong competition with only 4 teams invited from SA, 4 teams from NSW and 8 from Victoria.  The 16 teams were divided up into 4 groups of 4 teams for the qualifying rounds.  Our Warriors drew Bendigo, Kilsyth and Nunawading – all very strong regions for Basketball in Victoria.

Our boys came ready to play from the outset against a very impressive Bendigo team.  The game was very tight early on but our boys managed to hold on to a narrow lead going in to the last quarter.  Bendigo made every effort to bridge the gap on several occasions but our boys held them out on each occasion running out winners by 9 points.  In hindsight that was a terrific result as Bendigo finished 6th overall.

It would have been difficult not to be impressed by the standard of this game.  Kilsyth displayed an amazing ability to hit outside shots including a number of 3 pointers.  To our credit, in spite of their amazing shooting, we managed to stay with them for the whole match.  Unfortunately, with 90 seconds remaining in the game, Kilsyth held a narrow 4 point advantage that was enough for them to hold on to while chewing up the clock (with no shot clock).  Our boys went down by 4 and were bitterly disappointed.  A very entertaining and high quality game, even though we fell short.  Kilsyth went on to finish 5th overall.

Based on results thus far, we were expecting to prevail against Nunawading after they had been beaten by both Kilsyth and Bendigo.  Unfortunately, our boys weren’t switched on and played their worst game for the carnival.  Despite trying to come back from a poor start, the little Warriors went down by 30 points in the end.  Nunawading finished 10th overall.  With all first round games played, this left our boys 4th in our group and playing off for positions in the bottom 8 going into the last 3 games.

This was another hard fought, high standard, entertaining affair with our boys holding the ascendancy throughout.  Despite Knox’s best efforts, our boys prevailed by 7 points elevating our boys to the semi finals for the bottom 8.  Knox finished 15th overall.

Sydney were unlucky not to make it through to the top 8 after being very competitive in the first 3 rounds.  Like Kilsyth, Sydney demonstrated a rare shooting ability and had the upper hand going into the last quarter.  Our boys gave everything late in the game to bridge the gap but bravely went down narrowly by 6 points.  Another excellent standard game.  Sydney finished 9th overall.

Our final game of the carnival – the playoff for 11th and 12th positions.  Frankston started the better of the two teams and held a commanding lead all game.  Going into the last quarter our boys were doing everything to mount a challenge but still trailed by a decent margin.  To our boys credit, they never gave up and clawed their way back gradually to be only one point behind with 20 seconds to play.  A questionable call against one of our lads at that point seemed like a nail in the coffin but the boys didn’t agree.  Frankston threw up a late shot which was rebounded by Fiston with 8 seconds on the clock.  Sensing the occasion, Fiston took off down the court and temporarily lost control of the ball just over half way.  He managed to regain control just inside the 3 point line and threw up a shot only moments before the buzzer.  Amazingly, the shot went straight in and the Warriors won by a solitary point after having trailed for the entire game.  Heartbreaking for Frankston but an amazing way to end the carnival for a superstar junior Warriors.  We finished 11th overall.

The carnival was an amazing experience for all our young players who will hopefully go on to have many more successes.  Many thanks to coach Tom Macdonald, team manager Connie Parente, all parents and especially the players for all their efforts.  Great job Warriors!