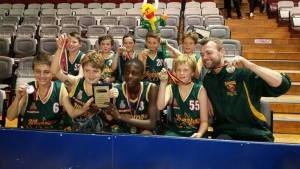 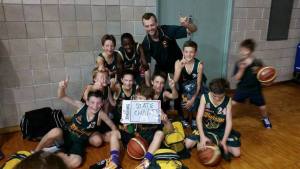 The U12 boys had an awesome carnival!  Our first game was on Thursday evening at Adelaide Arena against Eastern Mavericks.  We had previously played the Mavericks only once in summer season and that was a tight game (5 point win to us).  This time was different with our boys winning by 30 points.  We had a bye on Friday night and were scheduled to play 3 games on Saturday in a tough schedule for our team.  The first game of the day was against the Bearcats at Port Adelaide at 8am.  Our boys were impressive and won comfortably by 35 points.  The Saturday afternoon game against Norwood promised to be a tough contest after Norwood had managed to upset the strongly-fancied Sturt outfit by 2 points the night before.  Although it was a competitive contest our boys were too strong winning by 17 points in the end.  Our final game on the Saturday was against Sturt at Pasedena at 6pm.  Sturt were fighting to stay alive so were always going to throw everything at our team.  Sturt started very strongly but were not able to withstand the mighty Warriors!  Our boys triumphed by 15 points in a very entertaining and competitive game.

The boys made it to the semi finals undefeated but facing their nemesis to date, South Adelaide.  The Panthers beat us by 13 points in our summer season semi final and by 7 points prior to that during the season.  It was a tight contest right from the start in a very high standard game.  Our boys held a 2 point lead at quarter time and led by the same margin at half time.  The second half was very tight as well but the Warriors managed to get their noses in front by up to 5 points on a few occasions before South would respond each time.  In a very exciting finish, our boys ran out winners by 3 points!

The Grand Final at 1:15pm on Sunday afternoon was to be our 5th game in a little more than 24 hours.  Although the boys would have been battling tiredness and nerves, it was very evident that they were ready to play judging by the intensity and spirit in their warm up.  The Southern Tigers are a very worthy opposition and started the game very strongly.  Our boys forged ahead towards the end of the first quarter and held on to narrow lead at half time.  As the game wore on, the young warriors kept up the pressure and outlasted the Tigers for a brilliant 11 point win (45 to 34)!  It was awesome to see the celebrations of the players and the smiles on their faces!

On behalf of all parents of players and the club, a big thank you to coach Tom Macdonald and Div 2 coach Stephen Kellis for all the work they have put into developing the boys!  A very proud moment for all Warriors!