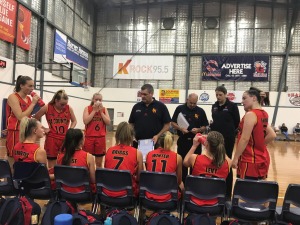 After a ceremonial opening to the Championships, SA Country Women began their campaign against Queensland South.  SA Country got off to a good start before Queensland South found their rhythm.  SA Country could not maintain the momentum and lapses in concentration were punished by Queensland South on the scoreboard.  Queensland South ran out eventual winners 76 - 52.  For SA Country Levy top scored with 13 points able assisted by Stratford (10) and Close (9).  Stratford, Winter and Ousey collected 8 rebounds a piece for the game.  SA Country will need to improve their shooting percentage and maintain their intensity for four quarters if they are going to compete with Vic Metro in their next game at 7.15pm tonight - it is not beyond them.  Coach Rattus will be looking for another good start and four effort from all players to improve on yesterdays display.

Later in the day it was SA Country Men's turn to shine against NT.  This was a complete opposite to the womens game with SA Country taking time to work their way into the game.  NT worked hard to contain SA Country before succumbing to the defensive pressure and offensive tranistion game of SA.  SA winning comfortably in the end 104-63.  As a result SA Country earnt 18 points from turn overs and score 68 of their points in the paint.  Once the game opened up Coach Petty was able to rotate his roster freely with 57 points coming from the bench.  Ball and Cannizzaro contributed 16 points each and Stasinowsky 15 points.  Walsh (9) and Makoi (8) shared the rebounding honors.  Game two today is against a formidable opponent in NSW Country but with a good hit out yesterday Coach Petty will be xpecting his team to build on the win and maintian the momentum.