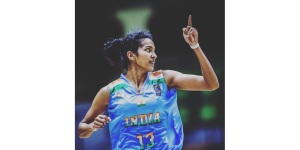 In 2006, the Ringwood Lady Hawks made history when they recruited India’s top female basketballer of that era and the first female to play professionally outside of India, the great Geethu Anna Jose. This week, twelve years later, the Lady Hawks have announced the signing of another Indian star, the National team captain Jeena Palanilkumkalayil Skaria AKA Jeena PS.

Jeena is one of India’s most recognizable Sports people and was recently awarded the Times of India’s Most Popular Basketball Player award. However, it wasn’t until the Lady Hawks took a tour of India in 2017 that Jeena was spotted as a potential by Lady Hawks Head Coach Tim Mottin.

“Our tour to India was fantastic and we played a 5 game series test in 5 different cities of India against the Indian national Champions, Kerala.” Mottin said.

“Jeena, along with a few other girls, were very impressive and we think that given a chance they can not only develop their game, but also do well in Australia and other countries.”

“Jeena will now get that chance,”

The Hawks were able to work closely with an Indian group called Team Rebound, who made the tour a reality back in 2017, and along with the Basketball Federation of Indian have assisted the Hawks to secure Jeena. There have been many supportive people working behind the scenes in India to ensure that the Hawks will have their second Indian player.

Standing at 180cm, Jeena will be faced with some new challenges against some of the talent that the new Elite League will provide, but the Indian Captain has shown she has the ability to use her strength and aggressiveness to create scoring opportunities. Earlier this year, Jeena showed her class and led her team to the Federation Cup and also was awarded the Most Valuable Player honours.

Mottin has enjoyed a great relationship with Indian Basketball and says he hopes to not only maintain it, but hopefully grow it in the future.

“We are very appreciative of the assistance we have received from the Basketball Federation of India and the great people of Team Rebound, the Kerala Basketball Association and Jeena’s employer the Kerala State Electricity Board.”

“We can’t wait to have Jeena here on court and see what impact she can have for us on and off the court.”