RAY & NICK HEAD TO THE US 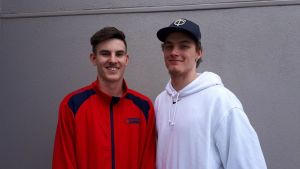 Nick Marshall and Raymond Harding leave for US Colleges tomorrow morning as they chase their dreams in Iowa and Nebraska. The Boys had a farewell lunch with a few team-mates today at Club Sponsor Northern Tavern and chatted about their plans for the next 12 months or so.

Nick is heading to NAIA school Clarke University in Debuque, Iowa. He has plans to be there for 4 years, playing for Clarke Pride, under Coach Jim Blaine and is looking to expand his basketball experiences. The good news is Nick will definately be back for Premier League in 2019!!

If you are looking to follow Nick's progress, details are available here - http://www.clarkepride.com/sport/0/1.php

Ray spent 2017 at College but has moved Schools and is now at South East Community College in Beatrice, Nebraska under Coach Joel Wooton. At this stage his plans in the short term involve re-establishing himself in the College system, following some frustration with injury in 2017.

All the very best Boys, have a safe trip and show them your best.