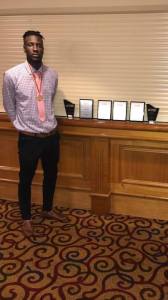 The Premier League had their annual Awards evening on Sunday the 22nd of July at the Stamford Grand and the event was attended by almost 300 players, referees, officials and special guests.

It was a BIG night for the North Adelaide Basketball Club with many of the awards heading our way.

Woolacott Medallist (Voted on by the Referees post game)

Most Valuable Player (Voted on by all Coaches post game week by week).