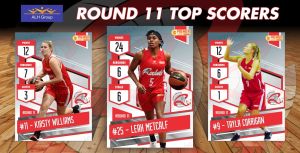 Ready to embrace the fierce rivalry between the two teams, our starters: Leah; Sam; Kirsty; Lauren and Tayla were quick to respond to Southern’s foul shots, with a swished in shot by Tayla. Leah was to have an awesome game, using her exciting fake move and jump move to score well in the first half. Lauren’s speed was amazing down the court and she put in so many second efforts to add to our score line. Kirsty and Sam played close, tight defence and together with the pressure from Southern, ensured lots of fouls were called. Jo and Courtney joined the team and Leah continued to score. At 4 fouls apiece , with about 3 minutes left, we were already 12 points up. Kirsty and Jo made both their foul shots and as Leah stole the ball from a Southern throw in, Courtney made the most of it with a smooth shot. A surprising big lead at quarter time of 28 to 10!

Jo and Courtney combined for a quick score to start the quarter and Leah made an exciting three. Strong hands and a determination for rebounds meant Kirsty and Sam were effective under the baskets. Sophie came on and after some messy play launched a three. Taylor and Abi took their turns and Taylor took a good rebound and provided some defensive pressure under the ring. Leah made a fast break and scored and was fouled and made the most of the bonus. At the long break the score was 49 to 23.

The starting five were back on and the intense play meant several turnovers before a score. The coach yelled for the pace to pick up again and the team accepted the challenge; with Kirsty fighting to score, Tayla again rebounding and Jo’s foul shots going in. Southern’s effort picked up and they went on a mini scoring spree and the foul count grew for both teams again to 5 all. Tayla and Lauren also made their foul shots and Sophie scored right near the end of the quarter, giving us still a comfortable lead; 65 to 42.

Tayla opened the scoring for the last quarter and 2 players for Southern were fouled off. Tia and Eliza stepped onto the court and then it was Jo’s turn to be fouled off. Lauren continued to fight hard for the ball and Abi made nice foul shots. Eliza tried for rebounds, Abi kept the pressure up and Tia’s speed ensured a great intercept which she finished off with a nice layup. Final score 83 to 60. Well done team!
Top scorers: Leah M 24 pts, Tayla C 12 pts & Sophie B 12 pts with most assists by Leah & Jo both with 4 and rebounds by, Kirsty with 7 Rebounds