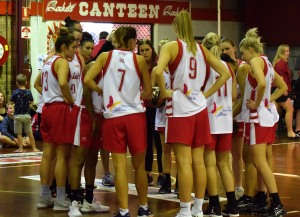 Well what a fantastic night for North Adelaide Basketball Club and for Club Champion Jo Hill in particular.

For those that haven’t been paying attention (where have you been?), we celebrated Jo’s 300th Premier League game last night and in typical fashion, Jo asked that the event be co-hosted with our annual Beyond Blue fundraiser.

Jo’s normal preparations for the game (against Forestville) were challenged, with a couple of pre-game speeches to acknowledge the milestone and the presentation of flowers and a gift from the Club. But in her professional manner she quickly switched to “game mode” and helped the Women’s team to a 78-64 win with 18 points, 5 rebounds, 1 assist and 2 steals off the bench!!

At the conclusion Jo made an emotional speech thanking everyone, but in particular family and friends, (many of whom had travelled to make up the big crowd), for their great support in what has been a stellar career. Jo still plays because she loves it so who knows maybe 2019 is on the cards!!!!!!!!!!

On behalf of NABC, thank you to everyone who came along and acknowledged our club champion, to Basketball SA for their support, and also to Forestville Basketball Club for their patience amid disruption to what are normal pre-game processes.

If you bought a T-shirt, a replica singlet, a raffle ticket, a special cup-cake or made a donation, thank you. In total we raised $1327.

Thank you to every Men’s and Women’s Premier League squad member, who are as always very, very supportive of our Beyond Blue Round, with each of them helping in several ways including purchasing their own playing singlets in an effort to keep costs down.

To the U16 girls, who did an amazing job, not only selling the raffle tickets, but then going around and collecting donations, thank you, a great job girls .

Also a massive thank you to Lucas Sterry, (Lucas Sterry Designs). It’s doubtful anyone really knows how much the Sterry family does for our club, but to design and produce our T’s, then provide them to us at cost is just one of the many, many ways and we thank you for that.

And to the game day volunteers. The game would not exist without you, so thank you for your help and support on what was a great night.

Lastly (but certainly most importantly), thank you to Jo. You are a true champion and we all feel privileged to watch you play each and every week.

If you are ever unsure about Jo’s amazing contribution to the game of basketball, check out our History Makers page on our website -