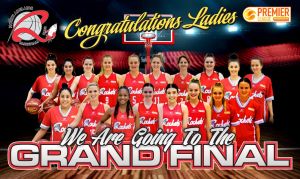 North Adelaide Rockets Premier League Women’s team have taken their semi-final opportunity to go through to the Grand Final to win 61 to 67 against strong competitors Southern Tigers.

With Southern Tigers going through as the minor round premiers the girls knew they were in for a tough game.

The starting 5; Kirsty Williams, Lauren Thornett, Norrisha Victrum, Opal Mader and Tayla Corrigan, came out hard but it was evident that they were in for a tough game and had to work hard to earn their place straight through to the grand final. Tayla got into foul trouble early gaining her second foul at the 6 minute 30 second mark of the first quarter. Fantastic skill was shown by the girls with Opal getting her first two points of the game off an impressive reverse layup. Southern then hit a fantastic run, giving them a strong lead and causing Coach Brenton Johnston to call a timeout. The girls came out strong from the time out with Norrisha ending the quarter on an excellent steal and 2 points. The quarter ended with Southern in the lead 16 to 7.

The second quarter saw Courtney Hansen and Sophie Byrne enter the game to make their mark. The girls pushed the ball drawing fouls and making foul shot, after foul shot, after foul shot quickly shortening the gap in the score. Some outstanding defence saw 3 straight turnovers which forced Southern Tigers to call a timeout. In the last few seconds of the quarter Norrisha shot a buzzer beater, giving the girls their 4 point lead; 27 to 31, going into half time.

Pressure was high coming into the second half; starters were back on and starting out early with 2 points by Opal at the 9 minute 8 second mark. Evidently the crowd could see the North girls were here to play with them attacking the basket, drawing fouls and going to the foul line to hit their foul shots; as Brenton says ‘foul shots win games’. The game had lots of quick and fast basketball with scores down both ends, unfortunately ending for North in the third quarter with Lauren causing a foul on the buzzer against Jemma Thacker and North Adelaide gaining their warning for the game. Fortunately, the girls finished in front with the score 41 to 44.

The last quarter, the last 10 minutes to dig deep and play their hardest in hope for the win, saw the girls come out hard and bring out the best basketball we had seen for the night. Southern started off well coming out with the first 2 points of the quarter; however this was quickly reciprocated by Sophie with a 3 pointer at the 9 minute 20 second mark. Southern made a quick run causing them to have a 2 point lead at the 7 minute 32 second mark. But this did not put the North girls down. They pushed even harder and stronger to come out with a few points and layups drawing fouls and making foul shots. The crowd cheered and the noise echoed through the entire stadium after every score. Both teams were here to play and both wanted the win.

After the fantastic effort from both teams and overcoming the challenges with the leaking stadium and wet court, the North girls came out on top winning 61 to 67; a well-deserved win. Top scorers were Jo Hill with 18 points, Opal Mader and Tayla Corrigan on 11 points and Kirsty Williams on 9 points. Jo Hill getting an impressive double, double following her top score with top rebounds of 11.

The team will now get a week off before playing in the grand final on August 19th at 6.15pm at the Titanium Security Arena.