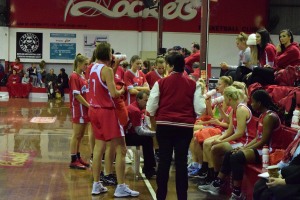 This was our last home and away game for the season and we started by congratulating Sophie on 100 Premier League games!

The starting five were Jo, Opal, Norrisha, Tayla and Lauren. Tayla opened the scoring quickly and the team were already playing fierce defence causing turnovers. Lauren made a great leap and ran the floor and was fouled. Better play led to two quick scores by Opal and then Jo took a great rebound. After a time out we welcomed Kirsty back and Courtney came onto the court too. Courtney was quickly fouled and made both her shots. Kirsty was flattened by an offensive charge from West; Lauren went to the foul line and then Kirsty made a terrific backwards layup. Sophie left the bench and the play became quite aggressive with Kirsty charged again and Jo was mugged and fouled. The score was very low, lots of running for little result; 14 to 10.

The team just couldn’t grab the offensive rebounds, but did better up the other end. Opal opened the scoring and Norrisha made a nice shot. The scoring continued with Tayla making a sweet layup and Kirsty finally taking an offensive rebound. Opal swished a long shot in and Kirsty and Lauren continued to play hard defence. So far so good, the score at half time was 26 to 25.

The starting five were back on and the intensity had lifted. Opal made another nice shot and Kirsty took a couple more rebounds. Jo was fouled and made the bonus, but West went on a shooting rampage of 7 to 11, reeled in a bit by Jo making a nice basket. Norrisha missed a shot but got the rebound and then scored. Time out instructions were to attack and shoot. This they did as the team took rebounds, Courtney spoiled a layup with quick defensive pressure and Jo and Kirsty were fouled shooting. The score at three quarter time was 39 to 47, not in our favour.

The team continued to put pressure on West and undue pressure on themselves. Tayla make a nice layup and then swished another in to give us all hope. Opal was on fire and Norrisha made her foul shots. A couple of threes helped and brought the margin down to four. The coach yelled get on it and the increased intensity caused a West shot clock violation. But it was all a little too late, as Norrisha was fouled off; West took the game 61 to 67.

Whilst that was disappointing, our place as third may come as a surprise to some. So let’s bring our A game and support up to Mt Barker Saturday night for 630pm tip off against Mavs.