Under 14 Boys at Easter Carnival 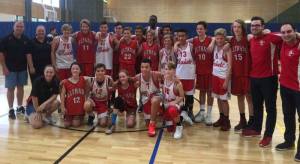 CONGRATULATIONS TO THE UNDER 14 BOYS

The boys recorded strong wins over Norwood (who had not lost a game since the start of summer season) and Pakenham before going down by 1 point in overtime versus Blackburn. The boys sealed a grand final spot with a win against Eastern.

Unfortunately Eltham were too strong and took out the Grand Final.

Congratulations to the U14.1 Boys on an outstanding carnival where they had to play some very tough teams. The boys learnt a lot from the carnival that will help them moving forward.