U18 Girls Reserves 1 win the Gold Medal at State Champs 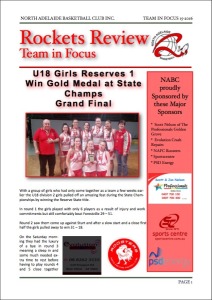 With a group of girls who had only come together as a team a few weeks earlier the U18 division 2 girls pulled off an amazing feat during the State Championships by winning the Reserve State title.

In round 1 the girls played with only 6 players as a result of injury and work commitments but still comfortably beat Forestville 29 – 51.

Round 2 saw them come up against Sturt and after a slow start and a close first half the girls pulled away to win 31 – 18.

On the Saturday morning they had the luxury of a bye in round 3 meaning a sleep in and some much needed extra time to rest before having to play rounds 4 and 5 close together later in the day.

In the first of these 2 games the girls beat West Adelaide 72 – 10 followed that night by Centrals 59 – 13.  By these rounds all 8 girls were back playing and all of them contributing to the wins.

These results put the team at the top of their pool and facing Norwood who are currently top of the ladder in the District Competition in the cross over semi-final.  It was a tight game with the lead see-sawing several times.  In the last quarter Norwood started to pull away and with 3 minutes left in the game they led by 7 points.

Coach Gary Saponari called a strategic time out and rallied the girls; telling them he believed they could win this game despite there being only 3 minutes remaining.  The girls dug deep and made up the deficit with some strong offensive moves and even stronger defense.  A foul with seconds remaining meant free throws for Norwood and a few tense seconds for North but missed foul shots and strong rebounding made for a tied game at full time.

A very tight 3 minutes of extra time saw North run out the winners by 2 points; 46 – 44 and a spot in the grand final against Western Magic.

This was a hard fought and physical game with the lead again changing several times.  After such a tough battle in the semi-final to even make the grand final there was a risk the girls had already played their toughest game.

Once again; though they played tough defense in what was a very low scoring final and eventually came out winners by only 3 points 28 – 25.

A great weekend and a great bonding time for the new team.  We are so very proud of the girls and their new coach.