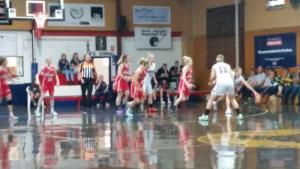 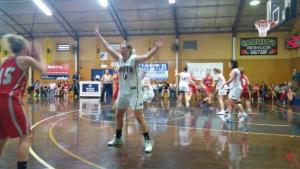 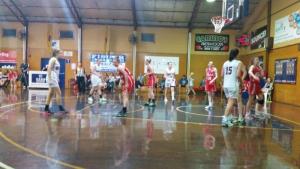 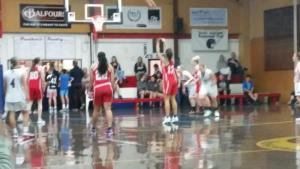 A large number of Rocket’s supporters made the trip to Marion to cheer on the women’s team and they weren’t disappointed. With the starting 5 consisting of Shannon McKay, Kirsty Williams, Lauren Badenoch, Shannon Tarran and Opal Mader, stepping in for the ill Jo Hill, the Rockets were ready to play.

Opal opened the scoring and the team played good defence. Driving hard to the basket they capitalised on their scoring opportunities and were leading 4 to 14 at the first quarter break.

Things heated up a bit in the second quarter, with South scoring better and playing hard. Not all went their way and their bench received a tech foul. The Rockets however still had a comfortable lead of 15, leading 20 to 35 at the long break. The leading scorers were Shannon Mckay 10 pts and Sarah Elsworthy 7 pts, the rebounders were Opal Mader with 4 offensive and 3 defensive rebounds.

Lauren and Sarah Elsworthy both shot beautiful three’s in the third and got the crowd cheering. Strong defence and good intensity resulted in a lot of fouls, with Georgia Green playing hard and subsequently being fouled off, much to the bench’s and supporters’ dismay. The foul count was 0 to 5 and Opal was the next to be fouled off after playing really well. The score was 42 to 55.

Both teams played hard and rotated all players, including Ana, Taylor and Caitlin. A nice steal from Lauren resulted in a basket and fired up the stadium. The fouls seemed to even up in the last quarter as South kept the pressure on, but the Rockets stayed focussed on their plays and demonstrated great teamwork and an improvement in their skills.

The Rockets enjoyed a win of 52 to 77 with top scorers being Sarah 15 pts, Lauren 12 pts, Opal and Kirsty 11 pts and Shannon 10 pts. It was great to see 5 players in double figures on the score board.

They now go into the Blockbuster round with 2 wins/1 loss and will see you all at Wayville Stadium at 8.15pm next Saturday.