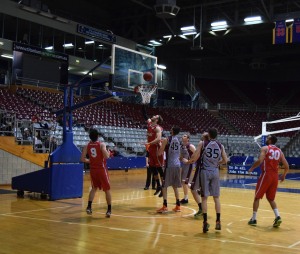 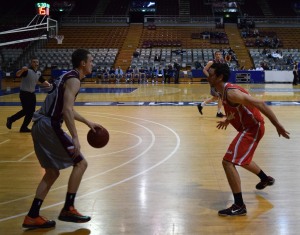 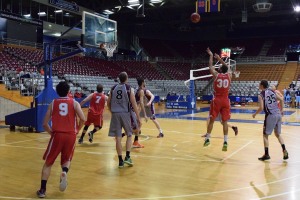 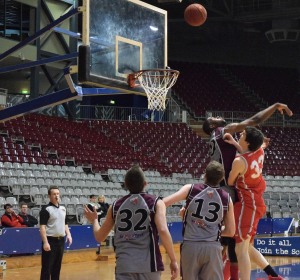 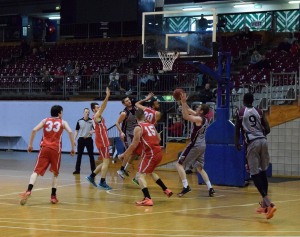 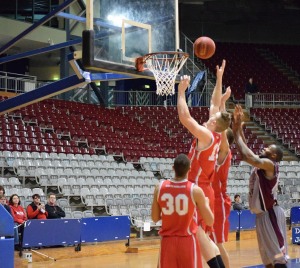 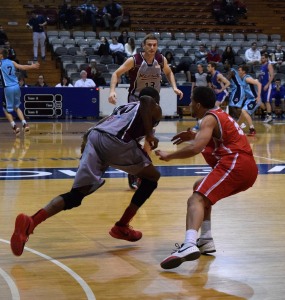 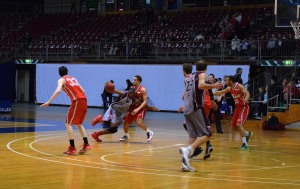 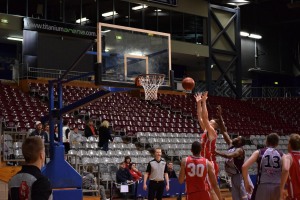 The losing streak continued for the Rocket Boys on Sunday the 28th of June at the Titanium Security Arena, against an up and coming Eastern team, who have enjoyed some recent success. Despite having an unbelievable first 5 minutes, rattling up 18 quick points and enjoying the lead for the vast majority of the game the boys were outscored 2-13 in the last couple of minutes, on the back of Eastern hitting three un-believable 3 point shots at the death. Final score 72-75.

Given recent results, the Rocket Boys were keen to get themselves off to a good start and they certainly met that goal, despite having starting guard Daniel Goodluck injured and on the bench. 4 point plays are reasonably rare in basketball, but Aric Miller had two 4 point plays in the first three minutes !!!!  In both cases he hit a huge 3 pointer and was fouled in the attempt, hitting the extra free throw. At the 5 minute mark we cruising at 18-8, Aric having scored 10 himself and Tom had 4. But from that point to the end of the quarter, momentum swung and Eastern outscored us 5-20. Quarter time score 23-28. We shot the ball well overall at 47%, but as has been the trend lately we allowed the opposition to shoot 53% !! Against the bigger Eastern front line we had won the rebounding count to this point 8-7, with big John Wernham having 3.

The second quarter was all Rockets as we outscored eastern 26-11.  Eastern scored 1 point in the first minute then did not bother the scorers again for another five and a half minutes, as the boys ramped up the “D” to the level we have seen many times earlier this season, but has been missing recently. A big team effort with everyone involved and contributing at both ends of the floor. Aric had a big first half offensively with 21 points, and he was well supported with John (7 points and 10 rebounds), Tom (4 points, 5 assists and 2 rebounds), Brett (4 points), Leroy (4 points and 3 rebounds) and Pikey (7 points and 4 rebounds). We continued to win the boards 24-20, had more assists 9-5, and fewer turnovers 5-11, so everything was pointing in the right direction. The half time talk was positive without being over the top, and the boys were urged to keep the momentum going and enjoy the remainder of the game.

The 3rd quarter was a dour affair with neither side getting anything going offensively. North outscored Eastern 13-12. We scored on only 6 of 21 attempts from the field, whilst Eastern fared even worse with 5 of 24 attempts. Defence was king, and the frustration showed at times. Statistical leaders were Aric with 25 points, and John had 14 rebounds. With 10 minutes to go and an opportunity to solidify a finals spot, the boys were keen to finish the game off.

The last was a massive disappointment. The margin remained around the 10 point mark for most of the quarter, but Eastern must have felt they weren’t out of it as we just struggled to build on the lead. With 2 minutes 53 seconds to go the margin was 8, (70-62), and this is where momentum went with Eastern for the remainder of the game. They “banked” a huge 3 pointer bringing the margin to 5 and you could feel them gaining confidence. The Rockets missed a 2 point atempt and at the 2 minute 3 second mark, Eastern hit another 2 (margin now 3). On their very next ofence (after a Rocket turnover) unbelievably Eastern banked another 3 and the scores were tied with 1 minute 39 seconds to go.  A couple of free throws (one to Aric and one to Leroy) made the margin 2 and there were 45 seconds left on the clock when Eastern hit ANOTHER 3, and led by 1 !! With a few seconds remaining after a missed field goal attempt, the Rocket boys decided to foul in an attempt to get the ball back, and the game finished with Eastern hitting a couple of free point throws and 3 up at the siren. A devastating loss in the circumstances. Statistics leaders were Aric with 29 points, 5 rebounds and 4 assists; John with 18 points, 16 rebounds and a blocked shot; Leroy 11 points and 11 rebounds.

On a positive note the boys played some of their best basketball for the season in the first 2 quarters, but unfortunately could not maintain it. Big game this week with Tom Rowe celebrating his 200th in the game v West at Hillcrest. The boys have the early tip off this week so get in and get your seat. !!!!!  A must win.