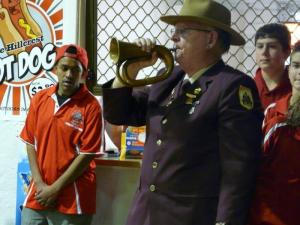 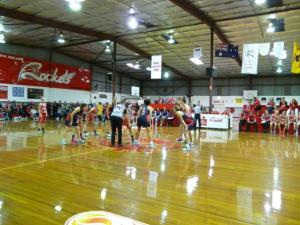 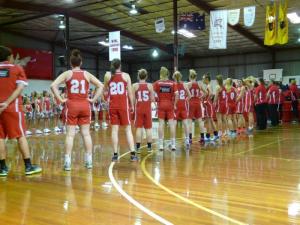 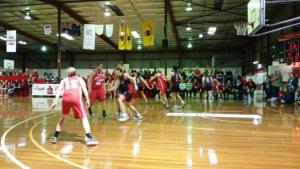 The first ever ANZAC Day Premier League round saw the long standing rivalry between the North Adelaide Rockets and the Norwood Flames continue into 2015. Traditionally, meetings between these two teams have been close encounters. The Norwood women entered the round as the only undefeated team, so the Rockets knew they were in for a tough battle, especially having to again play without captain and league stalwart Jo Hill. Rockets were undersized in comparison to the Flames creating a physical challenge the Rockets had to address.

The Rockets started the match strongly, running the ball well and scoring in offensive transition. The Rockets knew it was key to attack the basket hard and convert at the foul line. The first quarter was fast paced with few breaks in play. Coach Brenton Johnston rotated the bench early to ensure the main rotation could see out what would be a torrid clash. Rockets star Kirsty Williams went down within the first few minutes of the game with what looked like a knee injury, however she was back on the court by the end of the quarter, showing her resilience, strength and determination. Scoring was an even affair in the first quarter with the Rockets going into the break with a 5 point lead.

The second quarter saw a trade of baskets with Rockets and Flames scoring 16 points apiece.

Heading into the second half the Rockets had to up their intensity if they had any chance of beating the Flames. North allowed Norwood to go on a scoring run half way through the third quarter due to costly turnovers and as a consequence they were outscored 18-7. The Flames went into the final break with a 6 point lead.

Top contributors were Genna Anderson who finished the game with a tough 17 point, 9 rebound game and point guard Lauren Badenoch also made a solid contribution with 10 points and 5 rebounds.

The Rockets sit in 2nd place on the Premier League ladder with 5 wins and 2 losses.

The next game for the North Adelaide Rockets is on Saturday 2nd May vs the Forestville Eagles at Wayville.