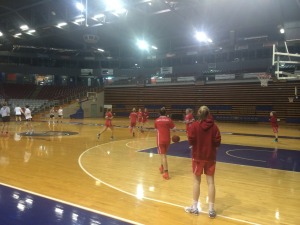 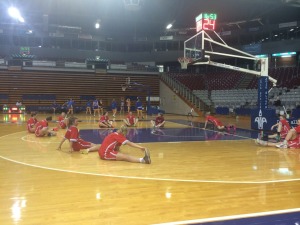 The North Adelaide Rockets Premier League women suffered their first loss of the season going down to the Woodville Warriors 51 – 58 in last night’s mid-week game. Coming off a tough tussle with the Bearcats last Saturday night, the Rockets knew the match against Woodville presented a challenge. The Rockets were without captain and star veteran Jo Hill, whilst Warriors import Callan Taylor was a new addition to their roster since the team’s last meeting at Hillcrest in Round 2.

The Rockets started strongly, applying tough defensive pressure causing the Warriors to commit a number of turnovers. North ran the ball well in offensive transition and were able to score the majority of first quarter points from fast break layups. The Rockets held a 14 – 9 lead at the first quarter break.

The Warriors outscored the Rockets in the second quarter 19 – 15. Woodville were able to quell the Rockets fast paced tactics, forcing North to play a half-court game. North struggled to execute offence, cumulatively scoring just 25 points during the entire second and third quarters. Undisciplined fouls, lack of patience in offence and shot selection, missed foul shots and lay-ups added to North’s woes and wasn’t reflective of their usual performance.

The final quarter saw the Rockets playing a trap defense to cause Woodville to turn over the ball, in order for North to regain possession. Both teams traded baskets for the entire last quarter, with the Rockets and the Warriors scoring 12 points a piece. North’s run was too late however, as they had been playing catch up since the beginning of the third quarter. Despite a number of 3 point attempts and missed opportunities during the final seconds, the Rockets were unable to connect and went down by 7 points.

Top contributors were Jamie-Lee Peris with a solid double, double of 15 points, 16 rebounds and young gun Opal Mader with 10 points.

The Rockets have another huge game coming up on Saturday afternoon in the Premier League’s ANZAC Day Rivalry Round which promises to be exciting!