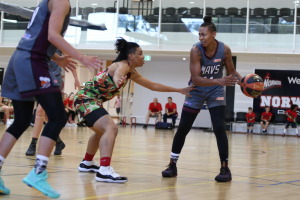 Competitive in every sense of the word, the Basketball SA Premier League is still near-impossible to split after 14 rounds. Equally fierce is the battle for player accolades, with dozens of Premier League stars putting their hands up for selection.

It’s the sort of starting five that would feel at home in the WNBL. Averaging four rejections a game along with a tidy 14 points and 11 rebounds, block queen Tess Bruffey nabs the highly coveted #5 role. Carmen Tyson-Thomas walks into the five carrying insane averages of 28 points, 11 boards and four assists, while Sabres sensation Kylee Smith has wasted little time since her Pasadena arrival, averaging a touch over 20 points and 10 rebounds per game for the ladder-leaders. Ta’rea Cunnigan – ranked fourth overall for points per game –is another whose delayed start failed to slow her down. With two Player of the Rounds, Halls Medal favourite Amanda Frost has been unstoppable for the Pioneers, averaging 22 points, seven rebounds and five dimes as she continues to lead her side toward a finals berth.

The sort of player a coach would build their team around, Mollie McKendrick has been near faultless in her return to the Panthers, pulling down the impressive figures of 17 points, 10 rebounds and four assists per game. Teige Morrell is another whose name could be read out on Halls Woollacott night, averaging 21 points, 13 boards and three dimes for a midtable Warriors side. Up north, Jazmen Boone’s season has been nothing short of herculean, ranking in the league’s top five for points and rebounds per game. With two 30+ point matches, Merv Harris Medal favourite Jasmin Fejo has been deadly off the bench for the Bearcats, cementing her place as a lethal shooting guard at just 19 years of age, while Brianti Saunders has run the floor superbly for an inexperienced Panthers outfit.

Living in an alternate reality to the highs of last season’s untouchables, Tayla Corrigan can continue to hold her head high. The Rockets big has managed 12 points and nine rebounds per game, stats strikingly similar to her 2017 All-Star Five season. Pachiyaanna Roberts has been Amanda Frost’s partner in crime down at the Ice House, accumulating a touch under 20 per match. Chelsea Roberts has seen her switch to the Eagles pay dividends in terms of opportunity, the sharpshooter finding form in late-April to hurtle into awards contention. Former teammate and splash-sister Shannon Webber has continued her role as the pinnacle of consistency for the Flames, while Ella Sawyer has exploded onto the Premier League stage, announcing herself to the competition through her elite intuition and passing attributes for the high-flying Eagles. If her rich vein of form continues, we could see a Merv Harris medal dangling around her neck in August.

COACH OF THE YEAR:

With her side soaring towards another finals appearance, it’s hard to find a recipient worthier of this accolade than Monica Bello. Last year’s heart wrenching 2018 Basketball SA Premier League Grand Final loss to the Rockets gave way to serious uncertainty, as it became known that the Eagles would be without Olivia Thompson, Sam Simons, Hannah Hank and Darcy Rees, amongst others. However, Bello has managed to instil a winning culture in her Forestville outfit, and the league is witnessing teenagers Ambah Kowcun, Gabriella Vidmar and Ella Sawyer become future stars of the competition. With just three losses for the season, and the added absence of Brenton Johnston, the Eagles coach is edging towards the gong.

Another coach in with a shout is Matt Sutton. The inaugural Pioneers women’s coach could not have asked for a more resilient side to be born out of such trying circumstances. Through hard work, determination and a touch of Frost, Mount Gambier are now 9-5 and vying for a ticket to the 2019 Basketball SA Premier League Finals Series. Can Mount Gambier’s coach continue to lead his side towards a fairy-tale in his first go at it?