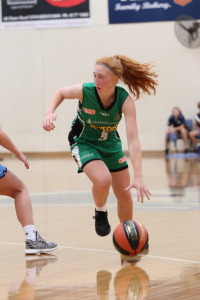 Round 5 in Mount Gambier was the last time these two met and the Pioneers edged out the Flames by only 4-points. Amanda Frost led the Pioneers with 23-points but it was the remainder of the team that helped the ladies hailing from Mount Gambier to get over the line! Mount Gambier had four others hit double figures in the 4-point outing but it was their ability to score inside that earned them the victory. Mount Gambier outscored the visiting Flames 40-28 inside proving disastrous for the visitors. Moving forward, the Flames will need to scare the Pioneers away from those high percentage shot and stop their extra passes to earn the W. In what will be a tight tussle, the winner may be able to move to as high as 4th place!

The Flames and Pioneers play what is set up to be the game of the round this weekend, with both sides being made up of strong players across the board and having extremely successful seasons so far. The Pioneers were nothing less than sensational again over the weekend, defeating West Adelaide 121-97 in a dominant performance on both sides of the ball. The team produced a huge 30 assists through their free-flowing team-oriented offence, and the starting 5 reaped the rewards, with Rathjen, Burdon, Barkley and Tom Daly combining for 98 points and 25 assists. Norwood will be hungry to get a win this week after having their game against the Tigers delayed for a later date but they will need to be at their very best to defeat a Pioneers team which has been on a roll. With players like the Webbers, Legan, Brine and Lycett, the Flames have a team which is capable of beating anyone through offence or defence and because of this, this game should be close and very entertaining. It is, however, tough to see how the Pioneers’ high-powered offence can be stopped at the moment, which may see them exact revenge on the Flames this week.