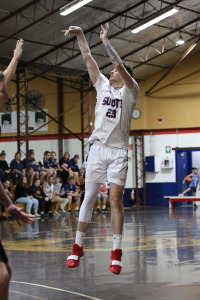 Fresh off a break, the Tigers visit Marion to try build back-to-back wins after overcoming the Pioneers at the Icehouse in their last outing. Aside from Molly McKendrick and Brianti Saunders who average 17-points and 20-points respectively, South sometimes struggle to find the bottom of the net. That being said, the Tigers are no longer one of the most dominant sides in the competition after finding themselves in 9th position after having a week off. The lack of offensive threats in Southern might allow them to be preyed upon by the Panthers. Sure they overcame the Pioneers on the road a few rounds ago, but there is a reason they are sitting in 9th place and the Panthers may be able to exploit it.

The Panthers will want to put the struggles they had against a last placed Sabres team in Round 12 behind them this weekend as they come up against a Tigers team who essentially had a week off after their game against the Flames need to be rescheduled. The team found it difficult to put together a sound offence for more than half of their game and paid the price from the perimeter, shooting 4-27 from distance. They’ll need to be much better against a Tigers team who will be eager to get back on the court and get a win this week. This year’s Southern side has been extremely potent inside on offence and on the glass, and with Turnage now having to step up and play an even bigger role than before, their game may focus in on that area even more. This may not be a bad thing at all this week, however, with South Adelaide often showing a bit of vulnerability inside.