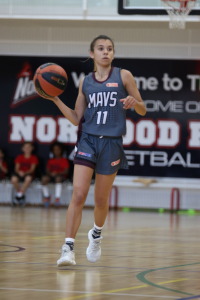 The Eastern Mavericks consistently show glimpses of goodness and Round 12 was no different after they knocked off the Forestville Eagles by 7-points. After yet another astounding effort by Tyson-Thomas last week, the Lions will need to slow her down and force her to use her other teammates. Against the Eagles, the Mavs only dished a mere 10-assists so forcing them to move the ball more may be crucial. After falling to the Rockets, the Lions are still looking to get their first win on the board and there would be no better upset than topping the Mavericks. Looking back to their contest against North, the Mavericks struggled to find the bottom of the net and finished with 28 percent from the floor, by making more open looks, the Lions could put some pressure on the Mavs.

The Mavericks came up against an inspired Forestville team over the weekend, and while they were able to produce some strong and effective basketball it was not enough to overcome their opponents, with the team eventually going down 115-95. Despite the loss, Eastern played a free-flowing offence which would have been enough to beat most other teams, producing 29 assists for high-percentage looks. McGee and Morris were the standouts for their side, combining for 40 point, 15 rebounds and 9 assists. The Lions will be disappointed with their performance against the Rockets in Round 12, but will have a good chance to recover and get another win on the board this week. However, the team will need to improve on their long-distance shooting after only hitting 10-34 shots from outside, and also take more care of the ball after conceding 20 turnovers in Round 12. If they can do this and get the same production out of Sapwell, who had 25 points off the bench, they may be able to steal a win. However, the Mavericks will be motivated at home after their recent loss and may be too hard to stop.