FEATURE: 36ers experience paying off in the Premier League 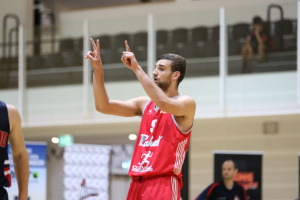 The quality and competition in the Premier League has undoubtedly increased this season, with
many teams boasting strong lists of domestic and imported players. This season also sees multiple
Adelaide 36ers playing major roles for their clubs, which has boosted the echelon and entertainment
value of the basketball being played.
36ers players like Michael Harris, Brendan Teys and Majok Deng for Forestville, Anthony Drmic for
Southern and Jack McVeigh and Bijan Johnson for North Adelaide have all made a mark on their teams during the season so far.
Michael Harris, one of the Premier League’s most promising talents, has made big strides with the
Eagles this season and credits the training he undertook with the 36ers last season as a key to his
success.
“Training every day and playing with and against some of the best players in Australia was really
beneficial and seeing what they do at training really helped me”, says Harris.
While Harris has been developing each part of his game during and since training with the 36ers, his
defence is something which he has identified as an area for improvement if he wants to make the
next level.
“There’s a bit of a joke at the Eagles right now that all I care about is offence. I definitely need to
work on my defence if I want to be an NBL player eventually, so I want to improve there”, explains
Harris.
“At the 36ers I learned you can’t guard every player the same way, so I’m trying to analyse
opposition and what they do best so I can try to prevent it. Hopefully I can continue to do this and
help the team get to where we want to be.”
22-year-old 36ers and North Adelaide Forward Jack McVeigh has also been using his experience
from the last NBL season to improve his play in the Premier League.
“Through my time so far at the 36ers my overall game, from shooting to defence, to controlling my
own tempo and pace, has improved”, says McVeigh.
“Obviously I’m only young but coming into the Premier League I can be a better leader and player
because of my time at the 36ers. I’ve improved a lot and being able to show that at the Rockets has
been great.”
McVeigh is also certain the Premier League has benefited from the continued play of 36ers players in
multiple teams.
“I definitely think it has helped. If you look at this year, the talent is widespread and there’s no super
dominant team overall. Anyone can win and there’s some really good basketball too”, McVeigh
explains.
“I even had a 36ers fan come up to me after a recent game and tell me how enjoyable it was, so
more people are realising that really good basketball is being played in the league.”
It’s not just young talent using 36ers experience in the league though, with players like Anthony
Drmic, who will sadly miss the remainder of the Premier League season after surgery, and Brendan
Teys providing consistent, top-quality basketball for their teams and the competition.
Teys, who just recently dropped 25 points, 7 assists and 5 rebounds on the Sabres, has been a huge
key behind the Eagles’ success so far this season.
The Forestville star has also played a role in developing young players like Michael Harris, and will
“often give (him) a few pointers and strategies on defence when he needs to”, showing how big an
impact the NBL players can have on the league and their teammates.
Let’s hope these players can continue to help their teams and add to what has already been an
exciting 2019 season.