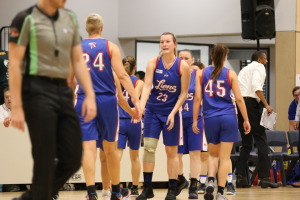 The Lions’ unenviable task of grabbing their first W of the season fails to become any easier this weekend against the giant-killing Norwood Flames. Hot off the defeat of the ladder-leading Sturt Sabres, the Flames have a chance to go second with a win over Centrals. For the Lions, Kevin Brooks has found life in new import Niroshka Perez-Crespo, and if she can continue to put up 17 points a game, a win will not be out of reach for the Gawler-based outfit. The Flames must be sure not to show any complacency in this one.

MEN by Daniel Renfrey
The Lions could not produce enough success on offence to overcome North Adelaide in Round 10, only managing to score 79 in a 14-point loss. Their defence also failed to close out on the Rockets’ shooters, allowing them to score an efficient 11-18 from long distance. If they want to beat the Flames, who have undoubtedly been the best team in the competition, this weekend, the Lions are going to have to bring more intensity and efficiency on both sides of the floor. The Flames, on the other hand, played a complete game against the Sabres, dominating on both offence and defence. The scoring was perhaps as widespread as it has been so far this season for Norwood, with Lycett, Daniel Webber, Legan, Long, Brine and Moultrie all scoring in double-digits and combining for 90 points. It looks like an extremely hard task for the Lions to quell the Flames offence and contain them on defence, and if they can’t do so, they won’t win this game.