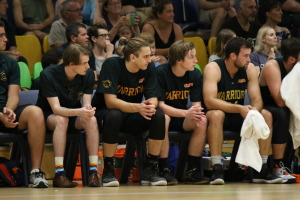 The Warriors will also have the chance to brush aside a disappointing Round 10, as it is their turn to host the Rockets. After a promising weekend, North Adelaide will look to build on consecutive wins against a Woodville outfit hellbent on protecting homecourt against a side they’re well-matched with on paper. It was a Tayla Corrigan inspired Rockets that defeated the Warriors 76-71 on Sunday after the centre put up 24 points, although Teige Morrell had herself 25 points and 17 boards in the close encounter. Both teams are currently 4-7, two wins outside the five, rendering this encounter all the more crucial.

MEN by Daniel Renfrey
The Warriors’ two losses over the weekend, including a 95-68 loss to the Rockets, have hurt their season’s momentum. They will be eager to right their wrongs and respond to North Adelaide by getting a win in Round 11. Being kept to 68 points while shooting poorly from the field is definitely a bad sign, but also shooting 9-21 from the free-throw line is a big cause for concern. Woodville will need to bring a more fluid offence with more ball movement and also more efficient execution from the foul line if they want to get this win. The Rockets were impressive though and their defensive pressure was too much for the Warriors. On top of this, their star players all performed well, with McVeigh, Dowdell, Starling and Johnson combining for 83 points, 6 steals, 14 assists and 34 rebounds. If these players can have another strong outing, North Adelaide will defeat Woodville again.