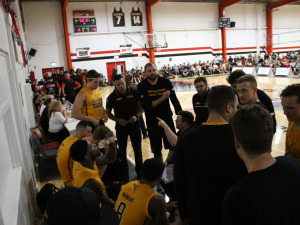 The Pioneers find themselves top of the three tied teams and the only side out of the three in a finals spot. Mount Gambier know if they keep winning they will hold that spot for at least another week. The Pioneers went 1-1 over the ANZAC day rounds losing to the Eagles before beating the Warriors. The Tigers are just one point behind the Pioneers, and a win here keeps them in touch for a finals spot. The Tigers also went 1-1 defeating the Rockets before losing to the Flames.

While the Tigers grabbed a win over the Rockets on Anzac Day, their defeat to Norwood on Saturday will have them eager to respond against another strong team in the Pioneers this week. While their defence was strong, Southern struggled to take care of the ball on offence in their matchup against the Flames, turning it over 17 times and conceding transition buckets as a result. Drmic was a positive for his team, with 28 points, but he will need more scoring support from Turnage, who only had 15, against Mt Gambier. The Pioneers had an extremely successful Round 9, defeating both Forestville and Woodville back-to-back. Their free-flowing team offence has proved to be difficult for teams to handle and when they can  produce a strong defensive display on top of this, they look very hard to beat. Solid play from Tom Daly and Kentrell Barkley in Rounds 8 and 9 was also a key factor in the team’s success and if they, along with the countless other skilful players on the list, can continue to perform at a high-level and execute the team’s selfless game-style, there is no reason why they can’t grab a win in this matchup.