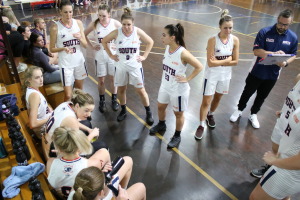 The Panthers are having a better season this year than last which isn't surprising with the addition of Mollie McKendrick. The Panthers lost both their matches in the past week against the first and second place sides. Their run doesn't get more comfortable as they will be looking to bounce back against the third-placed Eagles. The Eagles won both their games this week against the Mount Gambier Pioneers and Central District Lions and will take confidence with them in to Round Ten.

The Panthers finally recorded their first win of the season on Anzac Day and followed this up with a surprising and impressive 90-106 win over the Mavericks on Saturday. The Panthers produced solid shooting form distance against Eastern, hitting 40% of their shots, and applied strong defensive pressure, stealing the ball from the Mavericks 13 times. Allmon was again the standout player for the Panthers, with 37 points, 18 rebounds and 3 steals, but he also had some strong support from Jonnek and Hoppo. The Eagles weren’t as successful in Round 9, going down to the Pioneers 97-101 at home. The team produced a strong performance in what was a tightly contested game but were unable to execute on both ends when it mattered most, resulting in their slim defeat. Harris, De Wit, Mays and Teys were all valuable but the team clearly missed Deng’s ability to create for himself and others. As Forestville will be looking to bounce back from a loss, this may be too tough a task for the Panthers side, regardless of their two-game win streak.