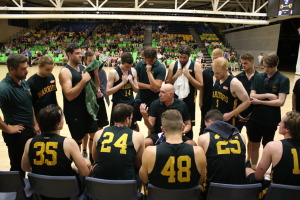 The Warriors are at the moment tied with two other teams on 17 points (and the Tigers aren't far behind with 16). Woodville finds themselves sitting in 6th spot, one slot out of the finals positions. The Bearcats are sitting in 4th at the moment, but a loss here would pull them back down into the dog fight going on for the last spots in the finals race. They match-up again after only just playing on ANZAC day where the Warriors won by 13 points.

The Warriors got a win against West Adelaide in Round 8 and will be hoping to do so again after losing to the Pioneers by 11 points in Round 9. The team’s main issue against the Pioneers was their inability to play through the tough defence of their opposition and hit a high percentage of their shots. This is something they found a bit easier a few days earlier against the Bearcats. Boonstoppel has been in a good run of form for Woodville as well and if he can continue his strong play the Warriors may very well be able to grab another win against West Adelaide. The Bearcats followed up their loss against the Warriors in Round 8 with a 77-81 loss to the Rockets on Saturday, struggling with their ball security and shooting percentage. Jefferson was impressive for his side with 22 points, 8 rebounds and 4 assists but he will need increased support from his teammates if they want to get revenge against Woodville in Round 10. If West Adelaide take care of the ball and get more players involved on offence, they will be a good chance to win this one. This one really could go either way but the Warriors will be tough to top at St Clair.