What We Learned Round Eight and Nine 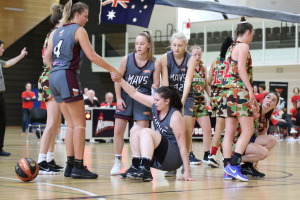 Ton up for the Sabres

Over the ANZAC rounds, the Sabres put down the hurt to the Lions and Panthers. Sturt scored 109 points against the Panthers and 119 points against the Lions. The more impressive thing is how the load was shared, with no Sabre scoring more than 23 points in either game. Kylee Smith topped the scoring in both games with 23 points.

When will the league learn not to let Gabriella Vidmar shoot threes? Against the Lions, Vidmar shot 5 from 9 from deep on her way to 26 points, which is becoming a standard night out for Vidmar. She had a rougher time against the Pioneers as she only scored one 3 from four shots. The problem is when you give her the opportunities, she will continue to fly high for the Eagles.

Flames prove to be the Hotter team.

The Mavericks were arguably the most red hot team heading into the first of the game in the ANZAC rounds. Well, the Flames did not agree as they shocked the league as they beat the Mavericks by 14 points at the ARC on ANZAC day. The Flames starters were critical in the win as all but one scored in the double digits. Tess Bruffey was the one player to finish on single-digit points (9) but made up for it with 15 rebounds. The Flames would also win their second game against the Tigers on Saturday.

The only thing left for Carmen Tyson-Thomas to do to win the MVP is walk up and accept it, come the end of the season. In the second game of the ANZAC round, the Mavericks wanted to make a statement to show the league it was a slight mistake to lose on ANZAC day. Well, Tyson-Thomas also wanted to make a statement, as she recorded a triple-double of 31 points, 13 rebounds and 11 assists, on 57% shooting and 5 steals to her name but if you asked her, the most important thing was the W the Mavericks got at the end of the game.

Bearcats can have it all.

Are Mt Gambier the Real Deal?

The newly introduced Mt Gambier Pioneers have slowly risen the ranks throughout this years Premier League season. As expected, their season has been a little haywire with them falling to as low as 8th place thus far. But, after knocking off a potential premiership favourite in Forestville by 4-points the question remains whether they can continue this form to topple the first place Flames the next time they face. The last time the two sides suited against each other, Norwood walked out 10-point victors in an epic overtime outing. With a tough string ahead in the Southern Tigers and Mavericks, the Pioneers will have to continue their form until the anticipated Round 13.

Traditional Kings of the Jungle Own the Paint

The Central Districts Lions chose to get up close and personal with the rim in Rounds 8 & 9. Over two contests, the Lions scored a whopping 106-points inside while terrorising their opponents. At first you might think that the Lions scored heavily against teams below them, but in fact they dropped 48-points inside against the undeniably strong Forestville Eagles. The Lions have a long road ahead before they are being deemed a contender, but the dark horses have rattled a few cages so far and aren’t appearing to slow down any time soon.

Another Week, Another W For The Flames

The Norwood Flames continued their dominance on the floor after flaming through their Eastern Mavericks and Southern Tiger counterparts. With this being expected due to their fantastic gameplay, the Mavs and Tigers couldn’t keep the Flames at bay despite the Mavs’ impressive development and the Tigers strong consistency this season. Norwood dished off an astounding 53-assists over the 2 games including 29 against Eastern...That’s right you read correctly.. Unfortunately we can’t write too much about the Flames. It also must be mentioned that their bench dropped a demoralising 50-points alone. After earning another two wins and moving them to 10-1, we wonder who is able to topple Norwood come finals.

Keep the ball safe from the Bearcats

The art of pickpocketing is one to be admired across all levels of basketball and the Bearcats have appeared to train their hands to strike appropriately. Over the two fixtures, West Adelaide managed to acquire 19 steals including 12 against the North Adelaide Rockets Saturday night. Luckily for both the Rockets and Warriors, West Adelaide notched only 24-points off turnovers when it could have been much worse. The ability to keep the ball safe is obviously pivotal in this game, but the ability to apply your active hands is something to be applauded constantly.

The Tigers experienced a defensive meltdown during the 2nd period in their game against Flames. Outscored by a disastrous 30-5, the hosts only fell by 13-points and assuming they made an extra five buckets (valuing 10-points), the remainder of the fixture may have played out much differently. Without this defensive breakdown, Southern showed that they are more than capable of knocking off or at the very least pushing the Flames to the limit much like Mount Gambier earlier this year or the Warriors who have handed them their lone loss. Nonetheless, this can’t happen unless they solve their 2nd quarter problem which showed Saturday night. Despite this, the race to the finals is definitely heating up and looking to be one to remember.