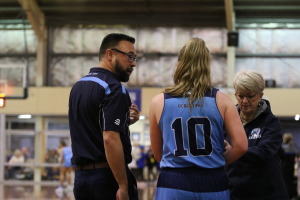 The Sturt Sabres are sitting top of the table and have only lost once this season. The Panthers
have improved from last year, the addition of Mollie McKendrick will help anyone. South
Adelaide are sitting in 8th with a 3-3 record. The Sabres are coming off a big win where Kylee
Smith scored 20 points on high shooting percentages. The Panthers beat the Lions in the last
round with Brianti Saunders top scoring for South Adelaide.

The two winless sides left in the competition will go head to head this Anzac Day, with both teams eager for a win. Sturt’s Round 7 88-76 loss against the Warriors added more salt in the wounds, with the side struggling to execute on either side of the floor. While the team struggled with their long-distance shooting on the offensive end, they also failed to prevent the Warriors from crashing the offensive glass on the defensive end, conceding 18 offensive boards. The offensive side of the ball was also a challenge for the Panthers in their 87-78 loss to the Lions. While South Adelaide were able to create some good looks at the basket, a lack of offensive fluidity and a tally of 16 turnovers did not help the cause. Allmon was a positive for the team however, with 23 points and 12 rebounds. This should be a close game and each club will be desperate to get their first win on the board. If the Panthers can cut down on their turnovers, they should be a good chance of winning.