What We Learned Round Seven 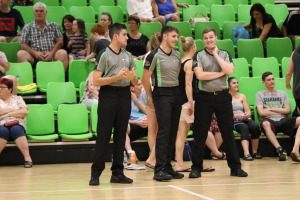 Second Game, Second Chance
A lot of seconds for the Tigers in round seven, the Tigers lost the first match of the week but
won the second. It was also the Tigers second match-up of the year against the Bearcats on the
weekend. In a tight affair on Good Easter Friday eve, the Tigers got over the line by four points
over West Adelaide. The win can be attributed down to their second-chance points. The Tigers
battled hard all night, and with 18 second-chance points compared 5, Southern put themselves
in a good position. The Bearcats had one more offensive board than the Tigers (20-19), but the
Tigers were able to make the Bearcats pay.

Eagles Are 4-4-4-4 Assists
The Forestville Eagles are all for assists it seems as four of their starters registered exactly four
assists. Chelsea Roberts was the only Eagle starter who did not log exactly four assists.
Roberts had three assists in the game that went along with her 14 points. Gabriella Vidmar was
once again the star of the game as she shot six 3s on her way to 20 points.

Winter is Here
Game of Thrones warned us that Winter was coming, they were referring to the Night King, but
they should have been talking about the Mount Gambier Pioneers and their Winter and Frost
down at the Ice House. Emily Winter and Amanda Frost were once again stone cold killers for
the Pioneers as they combined for 54 points as Mount Gambier ran out 87 to 62 winners over
the Rockets. Winter could not miss from three as she shot 5 from 6 from deep. The Pioneers
have now won 4 straight.

After watching Norwood topple the dangerous Forestville Eagles by the slimmest of margins, it’s becoming clear that the Flames have one of the most dangerous starting five combinations we’ve seen in 2019. In the Round 7 encounter, Norwood’s entire bench saw just over 6 minutes of action, having little to no impact. However, the first five on the team sheet showed they can hang with the best without the help of their second string. It is worth noting that the often-lethal Eagles had an off night from deep, shooting 4-18 from behind the three-point line. When both teams are firing on all cylinders, it will surely tear the house down!

Is this the return of JP23?

An athlete with immense quality, Jonathan Perry has been one of THE men to watch on Adelaide’s courts since his arrival last season. Unfortunately, form and injuries throughout his Woodville tenure have impacted his output, but that did not stop the sharpshooting import from making a statement in their victory over the Sabres. Perry dropped a game high 40 points shooting 50% from the floor, while his efforts at the charity stripe were similarly impressive, knocking down all of his 11 attempts.

The Mavericks are on the way up in the Premier League, largely due to the combination of American duo Novian Cherry and Brandon Morris. But the Mt Barker-based club proved that there’s more than two players in their squad, finding a new capable offensive target in Sebastian Bald. Bald dropped 26-points shooting 56%, a team-high in a tough four-point overtime loss to Southern. Although Cherry struggled to find the bottom of the net, six dimes from the Instagram-verified import helped his side push the Tigers to the brink. This year may not be the drought-breaking year for the Mavs, but they are definitely deserving their hype.

Lions pounce on transition in style

The Lions put the league on notice last Saturday night, showing their breakneck basketball capabilities in a disciplined win over South Adelaide. Many of Centrals’ 22 fast-break points came from blocks and culminated in dunks as the Lions stamped their authority on the match. A paltry 10 fast-break points for South displayed their inability to counter the lightning speed of the hosts. Now 4-3, teams around the league have certainly taken notice of the Central Districts Lions.

Who says inside game is dead?

The always-exciting battle between the Tigers and Bearcats wound back the clock in a showcase of traditional basketball. The two sides combined for 115 points in the paint as players like CJ Turnage showed their high-calibre talents. Lead by Anthony Drmic and Turnage, the Tigers toppled the Bearcats 113-93, despite valiant efforts from Bearcats stars Paddy Thomas and Bryan Jefferson in the 20-point loss. West Adelaide have not reached their usual lofty heights in the first seven rounds; therefore, it will be interesting to see what alterations reigning Coach of the Year Corey Maclean has up his sleeve.