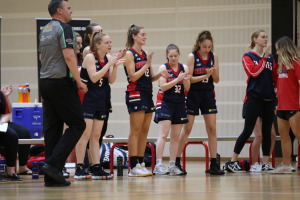 The Eagles are coming off a disappointing loss last week against the Bearcats. The Eagles shot a season-low 16% from three, shooting 4 from 25. Live by the three, die by the three is the saying and it was true last week. The Flames are coming off a good win over the Warriorswhere Cara Annetts put up 27 points. The Flames will be hoping to defend the three-point line and not allow the Eagles to shoot the three better this week.

Simply put, this matchup is mouth-watering. Both teams have been outstanding this year and whoever wins will take top spot on the ladder. Norwood’s performance in their upset loss to Woodville, while reasonably strong offensively, was not the best they have played defensively, as they allowed the Warriors to take and make many high-percentage looks. Brine was fantastic with 36 points and 17 rebounds but will need a bit more help from other players in the team against the Eagles. This Forestville side has been outstanding so far, producing consistently high scoring and containing the opposition defensively. The Eagles clamped down on West Adelaide in their 76-89 win in Round 6 and also hit a solid percentage of their shots. Majok Deng has been a superstar and was so again over the weekend, recording 26 points and 13 rebounds. This game could easily go either way but expect Norwood to bounce back with a complete team performance at home.