What We Learned Round Six 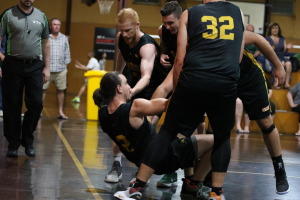 The Bearcats put in a full squad performance on the weekend against the Eagles. 11 players played minutes for West Adelaide and 5 of the 6 players that came off the bench scored. Tahlia Fejo top-scored for the Bearcats bench by scoring 14 points. Hajnal Nagy who may not have scored off the bench for the Bearcats, did contribute strongly on the boards, racking in 11 rebounds.

Mavericks Continue to Rise Up

The Eastern Mavericks grabbed 17 more rebounds in their 33-point win over the Rockets. Stephanie Ratliff grabbed a game-high 16 rebounds while Carmen Tyson-Thomas grabbed 9 rebounds that went along with her 26 points. The Mavericks had their way in the paint grabbing a total 60 rebounds but also scoring 52 points in the paint compared to the Rockets' 30.

Thacker Goes Whack and Deadeyes the Player of The Week

Jemma Thacker just could not miss as she shot 25 points on 75% shooting. Thacker started from the bench but after scoring seven in the first quarter with only one miss, Coach York decided to keep her in. Thacker played a team-high 29:44 minutes and added 4 steals in the win.

The Flames Get Hot From Three

Frost Has a Motto

Amanda Frost has a saying, "Sleep, Play, No Rest, Win, Repeat." Frost has played 2 games in consecutive weeks where she played the full 40 minutes. Frost scored 17 points this week, with 8 rebounds and 6 assists as she ran out the full game. If it’s ever a fight of the fittest, we wouldn’t blame you for placing your bets on Frost.

Inside presence can take Rockets to new heights

North Adelaide were impressive against the Mavericks, winning a close game and playing strong ball on both ends. The success the Rockets had on the inside was a key contributor to the victory, and could be a concern for many teams in the league. Starling, Dowdell and McVeigh were all dominant in this aspect of the game and the team had 72 points in the paint and 45 rebounds on their way to a solid win.

After their overtime loss against the Flames in Round 5 it was important for Mt Gambier to show they have what it takes to bounce back, and did they ever. Their 121-84 win over the Panthers was nothing but convincing. Widespread offensive and defensive involvement has been a theme for the Pioneers so far this season and this was clear over the weekend with everyone contributing on both ends of the floor. With the roster and game style the team seems to have put together, many clubs will be wary of them.

Forestville added yet another impressive scalp to their collection in Round 6 with their 13-point win over the Bearcats. Arguably the in-form team of the competition, the Eagles have proved they can both shut down tough opposition and blow them out on offence. The team has a stacked roster with players like Mays, De Wit, Teys, Harris and Deng all consistently putting in strong performances and it does not look like many teams will be taking them down this season.

Norwood’s flame can be put out

If there is one big lesson to learn from Round 6, it is that the Flames can be overcome. The Warriors pulled off an upset not many would have seen coming, defeating Norwood by 9 points. Maiorana, Meldrum and Perry all had their way with the Norwood defence, combining for 67 points. Woodville also hit 53% of their attempts from distance, showing that successful distance shooting may be a weakness for the Flames. Norwood will again have their mettle tested against the Eagles this round but expect them to play like a team on a mission.

The Tigers got their third win of the season over the weekend, defeating the Lions mainly by way of stifling defence. CJ Turnage unsurprisingly had a lot to do with this win, dropping 29 and 18 on his opposition. Turnage has been on a tear so far this season, averaging 15 ppg, 11 rpg and 2 apg all while shooting 53% from the floor. It’s becoming more apparent that Turnage, for yet another season, cannot be completely contained and is a major key to the Tigers’ success. If he can continue to perform well, Southern will be in a good place.