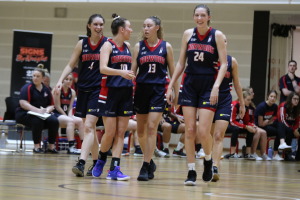 The Flames are coming off a hard-fought loss to the Pioneers while the Warriors overcame a slow start to beat the Tigers last weekend. The Flames bench will want to contribute more this week after scoring only 8 points in the loss to the Pioneers. Tess Bruffey had a solid game as she posted 20 points, 11 rebounds and had 4 blocks for the Flames. The Tigers' Isabella Stratford continues to be the standout performer as she averages 12 points and 7 rebounds for the Tigers.

Woodville were blown away in the latter stages of their 104-73 loss to the Tigers, losing their way on both offence and defence. While the side got decent bench production to support standout players Stanbridge and Boonstoppel on offence, it was not consistent enough, and was not enough to cancel out the 60 points in the paint their defence allowed Southern. They’ll need to shift to another gear if they want to stand a chance against league leaders Norwood, who pulled off a thrilling comeback to defeat the Pioneers in overtime at the Ice House. While the Flames struggled to gain the front foot against their opponents for much of the game, a late showing of mental edge from the team, as well as James Legan’s heroics, allowed them to force it to overtime and grab a brilliant win. It is looking more and more unlikely this team will lose in the early season and it should be no different this week.