What We Learned Round Five 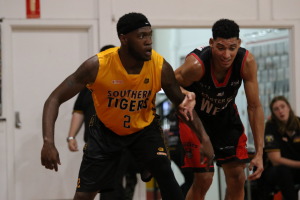 Before the week, the Eagles were soaring 4-0 with the closest margin being 10 points. Sturt was

in a similar position as the Eagles the week before, the same record with dominant wins to boot.

someone off their perch. The Sturt bench outscored the Eagles bench by 8, which was the final

margin between the two teams. Elissa Brett was big off the bench for the Sabres as she had a

felt the Frost on Saturday night. Amanda Frost played the full 40 minutes as she led her team to

a nail-biting victory. Frost scored 23 points and added 6 rebounds and 4 assists on the way to

the 4-point victory. Frost scored 5 out of the Pioneers 12 points in the last quarter as the

Pioneers held on as the Flames came roaring home.

Nothing but the Sunday Best

Carmen Tyson-Thomas and Brooke Basham got the job done in the Sunday matinée game.

Basham scored 16 points with incredible efficiency as she shot 70% from the field, while

she scored 27 points and added 4 steals to her name. The Mavericks defence was also in fine

form as they held every Lions player bar Jazmen Boone to single-digit points.

Mollie McKendrick - 21 points, 23 rebounds, 10 assists, and a victory over the premiers. Does

anything else really need to be said?

keep winning is a positive sign. Teige Morrell was joined by Sherrie Session as the duo led the

way for the Warriors. Morrell recorded a double-double of 11 points and 14 rebounds, while

Session led the team with 19 points. Morrell was also active on the defence as she registered 2

At first, the high amount of points tallied in the Points in the Paint category seemed to be something

that would eventually decline as teams found their defensive forms throughout the season.

Interestingly, teams have appeared to move away from their midrange and long ball game and

moved to more high percentage areas. This week, North Adelaide toppled the Panthers 97-83 after a

strong opening term and in the process dropped an incredible 68-PITP. If that tally isn’t enough to

convince you that sides are moving closer to the bucket, Mt Gambier and Norwood dropped 48 and

46-points in the paint respectively in the overtime contest. Nonetheless, this is an amazing spectacle

for fans of traditional basketball roles.

Whose Putting Out the Flames?

Heading into Round 6, the Norwood Flames are at the top of the mountain looking down after going

6 games undefeated. After knocking off the Pioneers in Overtime at the Ice House, it is becoming

Flames. Forestville and the Flames meet next week (13th April) in what will be the real learning curve for both the sides in a highly anticipated matchup. But until then, Norwood and Forestville will face Woodville and West Adelaide respectively. Until the thirteenth, anything is possible while both sides defend their opening winning streaks.

period. The defenceless Warriors were outscored 41-16 during the third quarter in what appeared to be a merciless Tiger pack and weak Warrior outfit. The Warriors managed to hang with the reigning champions which is one positive sign. From this, we know that the Tigers are more than capable to exploit a weakness and punish you on the scoreboard through a variety of players, after four of their

starting five were in double figures with three being consistent threats.

Better get back fast

track back on D as fast as possible. Both Centrals and Eastern pushed the pall up the floor as fast as

possible and scored a combined 65-points on the break between them. Transition offense for any

side can be a dangerous tool and is known to make players break down defensively. If the Lions and

Mavs can master this, they just might keep climbing the ladder towards finals. As impressive as this was, this is only one remarkable aspect of the game after Brandon Morris dropped an incredible 42-points off 66% demonstrating he is one of the league’s most prolific scorers.

Strangely enough the West Adelaide Bearcats struggled to find the basket against the Lions.

27-times resulting in 21-points from turnovers. The Centrals kept the Bearcats to 55-attempts from the field compared to their 71. Aside from scoring roughly the same number of baskets (35-32), Centrals punished the Lions from deep, an area they have been familiar with over the past few seasons. After going 3 and 2 thus far, West need find a way to cut this 2-game losing streak before it hurts them down the stretch.