What We Learned Round Four 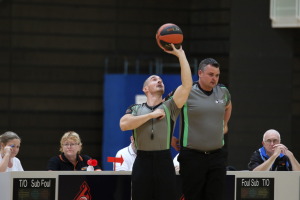 Tigers Prove to Be the Big Cats
The Tigers were looking down the barrel again as they trailed by eight at the half to the Central District Lions on the weekend. Zali Grosser was not going to let the Tigers go winless for another week as she lifted her game to another level in the second half as the Tigers ran out a 48-21 second-half performance. Grosser finished with 17 points, a game-high 15 rebounds, a game-high 6 assists, 2 steals, a block and made herself felt on the defensive end as she drew 8 fouls.

Famous Trios
The Three Musketeers, Harry, Ron, and Hermione, Destiny's Child, and now Brooke Basham, Stephanie Ratliff, and Carmen Tyson-Thomas. The big 3 at the Eastern Mavericks all put in star performances to be the first team to knock off the Sturt Sabres. Basham ended with 21 points and 7 rebounds, Ratliff ended with 15 points and 20 rebounds, including 11 o-boards, and Tyson-Thomas ended with 24 points and 6 rebounds. If all three players perform, they will be very hard to stop this season.

The Battle of the Paint
It was a good old slugfest at the ARC on Saturday between the Flames and the Bearcats. Both teams scored in the 30s in the paint which was the only match to do so this weekend. The Flames scored 36 points in the paint while the Bearcats scored 38. In the end, Norwood's ability to hit free throws saw them close out the game as Kelsey McKay and Cara Annetts both hit big free throws to win it. McKay had the ability to tie with her first and take the lead with the second with 7 seconds to go and with 3 seconds to go Annetts had the ability to ice the game. They both shot 2/2 in the last 10 seconds.

Warrior Attack by Morrell
Teige Morrell led the way for the Warriors as they comfortably beat the Panthers on Saturday. Morrell had 30 points on 10 from 14 shooting and went 10 from 15 from the line. Morrell did not even attempt a three which shows that the inside game is still dangerous. Morrell added 14 rebounds to her outstanding shooting night.

Rockets Wrapped up in Cotton
The Eagles put another tick down on their title challenge as they knocked off last year's winners the North Adelaide Rockets. Forestville was led by Amy Cotton as Cotton finish with 20 points and 13 rebounds. The Eagles had a big 21 to 6 third quarter that took the fuel out of the Rockets as they ran out winners up at Hillcrest.

Tom Kubank made his return to the Bearcats Premier League side last Saturday night in a highly anticipated game against the Norwood Flames. Kubank didn’t have the season debut he potentially would have planned after struggling to find the bottom of the net for much of the evening (3-11 FG & 1-6 3P). After having his best Premier League season to date, Kubank averaged 15.08-points and will look to further breakout this season. Nonetheless, the Bearcat gem will look to have more of an impact against the Lions this week and get his side back in the winner’s circle. Keep your eye on Kubank as he may just have another breakout season and torment teams down in the business end of the season.

Tigers forgetting how to dish?

Across every sport you learn from the first day to pass the ball around to find the best option. The Tigers are notorious for finding the open man or better opportunity to score although not this week. Lethal weapon Anthony Drmic finished with a game high 35-points while the team dropped a mere 10-dimes altogether. You might be thinking what does this even mean? It means that the Tigers are always dangerous on the offensive end and will punish sides whether they are playing team or iso-ball if a couple players heat up.

Cherry and Morris On Top

Perhaps one of the most dangerous duos in the league this year, Novian Cherry and Brandon Morris took to the floor to total for 53-points. Off a combined 20-32, the pair played a strong role on edging out the Sabres by a pair of points in Round 4. After back-to-back wins, the Mavericks are in one of the best positions they’ve seen in recent memory and may have something to look forward to for 2019. With their talent in mind, the Mavs’ next step must be to develop their local talent and continue their building phase. The big question is, with Cherry and Morris at the helm, are they good enough on and off the court to develop the team around them and build something special for the future?

Warriors Can Strike in the Paint

Round 4 saw the Warriors show what they can do inside when the opportunity arises. Woodville slayed the Panthers by 15 after putting on a show in the paint. In what may just be one of the highest Point in the Paint totals for 2019, the Warriors notched 62-points inside while only dropping 1-lone trey from deep. The one triple doesn’t mean that they don’t like to pull the trigger from deep, but manage to alter their game plan when needing it the most. Joshua Clippinger and Luke Stanbridge lead the Warriors to the victory with 25 and 19 respectively. But what stole the show is Clippinger’s 25-points in 25 minutes off the bench!

Forestville have been dominant for much of the season so far and have broken the 100-point barrier in every outing with their battle with North Adelaide being no different. In another anticipated round 4 fixture, the Rockets were dismantled by Forestville and found themselves down 9-34 at the first break. Forestville were so dominant that their largest lead of the night was 33-points and outscored the Rockets by more than double digits in two quarters.  North Adelaide were arguably their first test of the season and after blowing them out Forestville have now solidified that they are one strong title favourite.