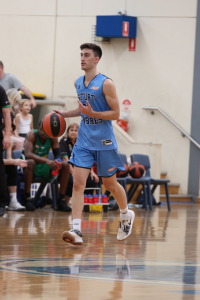 A possible (way too early to call) Grand Final preview will see the Eagles go up against the Sabres this weekend. The Sabres will be looking to respond after their first loss for the season last week to the Eastern Mavericks. The Sabre starters all had poor games that they will all be looking to redeem this weekend. The Eagles had another excellent showing against the reigning premiers the North Adelaide Rockets. The Eagles will be looking to do what the Mavericks did and keep Sturt Starters quiet, especially youngster Ruby Porter.

The Eagles continue to look like a team capable of going all the way this year after disposing of the Rockets by 23 points. Not only was the defence strong, but the kind of team basketball they played on offence looks extremely dangerous. The team’s ball movement led to high percentage looks from the field and a huge assist count of 25. While Harris, Mays and Teys were all superb, it was Majok Deng who starred for his side, with an impressive 30 points, 19 rebounds, 4 assists, 3 blocks and 2 steals. Beating this team might be too much of a task for a Sturt side who are still yet to win, and lost in Round 4 to the Mavericks 75-77. While Desantis scored an impressive 30, the Sabres were not able to come away with a win in a gritty game, lacking the ability to come up big when needed and going down in a heartbreaker. They’ll find this week’s opposition harder to overcome and will most likely not be able to grab their first win.