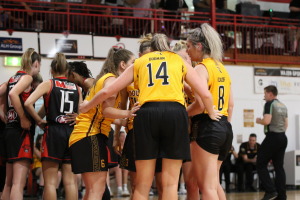 Both teams will be looking to get their first win this weekend as the Tigers get their home campaign underway against the Lions. The Tigers have travelled for their first two matches and will be happy to be back in Morphett Vale. The Lions led by Jazmen Boone will be hungry for their first win, the Lions continue to show promise but still are missing that final touch. The Tigers will be upset following their loss to the Pioneers last week after their poor start, finding themselves down ten points at quarter time. Denelle Fawcett was the only player to score in double figures for the Tigers, and that will need to change if they want to win this weekend.

Despite Turnage, Drmic and Calligeros combining for 79 points, 11 assists and 23 rebounds, the Tigers failed to grab their first win of the season in Round 3, losing out to the Pioneers 108-99. Southern put up a fight but were unable to hold the Daly brothers and get the win. An improved defensive performance this week should see them get the win against a Lions team reeling after their 46-point loss to the Eagles. Central Districts will need to improve on their shooting from distance after only hitting 6-32 against Forestville. They will also have to crack down on defence after letting the Eagles score 138 points, as the Tigers’ key offensive players are capable of putting up big numbers against anyone.