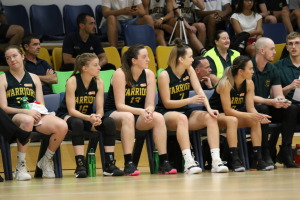 Both teams had similar performances on the previous weekend as both sides suffered a significant loss. Teige Morrell was the leading player for Woodville, and the Panthers will need to watch her if they want a chance to win. Mollie McKendrick is the star of the Panthers and continuing to dominate the league; the Warriors will need to have a plan to slow her and Brianti Saunders down.

MEN
The Panthers’ struggles continued in Round 3 with a 66-95 loss to West Adelaide. The side could not manage to overcome the defensive presence of their opposition, and were overwhelmed by the Bearcats’ offence on top of this. Allmon was a positive for the Panthers, recording 24 points and 8 rebounds. However, things could turn around for his side if he can produce the same kind of game against a struggling Woodville. The Warriors are also yet to win a game this season, and will be anxious to bounce back from their 94-77 loss to the Mavericks. Meldru, Alex Maiorana and Perry were solid, combining for 45 points, but their team struggled too much with shooting efficiency to overcome Eastern. With both teams being eager to get a win, this should be an interesting matchup.