What We Learned Round Three 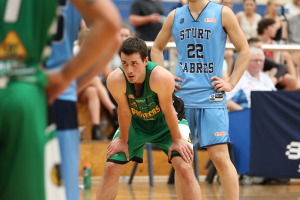 Rockets Have Two Bites of the Cherry

Sturt Have a Pet Rock; It's Called Winning

Not only did the Sabres stay undefeated but they looked after the ball exceptionally in their win over the Bearcats on the weekend. Sturt had just 11 turnovers while forcing West Adelaide to have 30 turnovers. Sturt punished the Bearcats for their indiscretion as the Sabres scored nearly half their score (34 points) on points from turnovers. Lauren Gibbons, Elissa Brett, and Zoe Walker-Roberts combined for 10 steals while only giving up 1 turnover.

Gabriella Vidmar is one of many Eagles that are finding their feet behind the 3-point line and letting it fly. Vidmar is averaging 3.33 threes made per game this season and has been given the green light from Coach Allen. Two weeks ago, Vidmar shot 5 from 9 from three and followed it up this week by shooting 3 from 6 from deep. The Eagles are undefeated this season, and Vidmar's deadly three-game forces the opposing defence to be honest and not slack off.

Carmen Tyson-Thomas has picked up right from where she left off last season. In the two games, she is averaging 24.5 points, 13 rebounds, and 3 assists. The most incredible thing she is doing is not surprising anyone with this ridiculously high level of play. She is second in the league for PPG and third for RPG. If she continues at this level of play, write down the Mavericks for the finals.

Is Daly a Woollacott threat?

After 3-rounds and a mixture of results, the Mt Gambier Pioneers knocked off the Southern Tigers after a spectacular performance by Tom Daly. Daly flirted with a triple double (40-points, 7-rebounds and 8-assists) and showed why he needs to be stopped or at least controlled throughout every fixture. Despite what may be a promising sign, the future challenges that he and the Pioneers will face will put he and his side further into the limelight and show their true colours. Unfortunately we will have to wait another week for Pioneer action, but it will only build hype for their huge clash against the Norwood Flames in Round 5!

Arguably one of the most threatening if not the most threatening starting 5’s across the league put an asterisk next to their name during Round 4. Norwood held off a hot Jack McVeigh and North Adelaide Rockets in a 1-point thriller despite Daniel Webber struggling from the floor. Webber, a strong player in the Norwood outfit failed to find the bottom of the net in 32-minutes yet was effective on other areas of the court. With Webbers shooting struggles, the remaining Flames starting 5 all recorded double figures and assuming Daniel Webber is on song, the Flames will continue to overcome each challenge thrown their way!

Send the Bearcats to the Line!

We may have found a weakness in what is usually an incredibly strong Bearcat unit, their Free Throw shooting! In back-to-back fixtures, the Bearcats struggled from the line and recorded 19-29 and 20-31 respectively showing a potential hole in their game. If these two games are not enough evidence for you add this, during their Round 1 contest against the Tigers they also went 12-28 (42%) from the line. It may be an underlying game plan to send West to the line and make them earn their points although, if you foul them, make sure they don’t get the and 1.

Eastern are at it again

The loss of dominant Luke Stanbridge may be a contributing factor as to why the Warriors fell to the Mavericks OR we may be seeing the start of an Eastern Maverick rise. Last week we mentioned to keep an eye on the Mavs after falling to the Flames by only seven and they have backed up our statement by posting a convincing win against Woodville. The combination of Morris, McGee and Cherry in the starting line may cause a ruckus across the league and with some great input from the bench like during Round 3 we could expect to see a higher number in the win’s column this season.

How Do You Slow Down the Eagles?

How do you shut down the Eagles? The offensive weaponry the Eagles boast continues to impress as the weeks proceed with last weekend being no different. In an unbelievable scoring outing, the Eagles notched 138-points and had 7-players in double figures with 5 either scoring 20-points or just under. To make things even more impressive, Forestville shot 62 per cent from the floor and 60 percent from deep! Astonishingly, it wasn’t all iso-ball as the Eagles’ ball movement was phenomenal resulting in 29-assists. With scoring outings like this, sides will have to stick to their defensive plans and maybe just hope for the best.