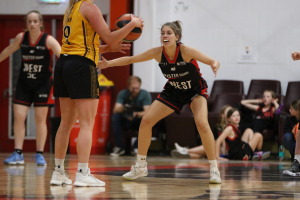 The Bearcats got their season off to a good start beating the Tigers last week, this week they face the South Adelaide Panthers. The Panthers had the bye last week but in their only game for the season, they beat the Flames. Mollie McKendrick and Brianti Saunders were stand out performers in that match and Bearcats will have their work cut out for them. Standout performers for the Bearcats in their opening victory were Sky Langenbrinck and their bench performers. The Bearcats bench put the hurt to the Tigers, and the Panthers will need to play solid for the full 40 minutes to avoid the same fate.

The Bearcats will head into Saturday night with a bunch of confidence after dealing with Southern by 15 in Round 2. West Adelaide’s ability to keep their defence tight and contest shots heavily was a huge key behind their win. An even distribution across the starting 5 on offence was also a major factor, with Johnson, Heyward and Thomas all scoring 17, while Jefferson had 22. South Adelaide will be hoping to come back fresh and fired-up after missing a week. They’ll need to provide better support for Hall and Allmon, their biggest contributors in their Round 1 loss against the Flames, if they want to grab a result. The battle on the boards and in the paint could determine what should be an intriguing matchup.