What We Learned Round One 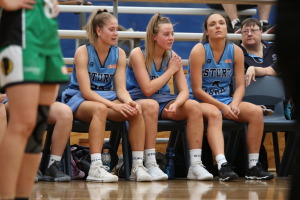 What We Learnt Round One

New Season, Same Rockets
The North Adelaide Rockets have picked up where they left off — defeating the new to the
league Mount Gambier Pioneers, 75 to 66. It wasn't all easy work for the Rockets as they had
opened up a ten point gap midway through the third before the Pioneers pulled it back to be
level heading into the final term. This fightback seemed to only anger the Rockets as they came
out of the three-quarter huddle and went on a 21 to 5 run to start the fourth and to put the game
to bed.
The Death of the Sturt Sabres Has Been Highly Exaggerated
Losing the reigning Halls and Harris medalist in Chelsea Brook would have been a big blow for
the Sabres. You would hardly blame them if they struggled this season, but it seems no one told
Sturt that as they start the season with a perfect 2-0 record. Ruby Porter had a solid weekend
leading the Sabres in both games, scoring 22 points on Saturday night in the win against the
Norwood Flames before backing it up the next day with 21 points and five steals against the
Pioneers which also ended in a victory for the Sabres.
Eagles Battle Til The End
Coaches always say that the defensive possession is not over until the ball is back in your
hands. Well, the Eagles took that to heart as they made sure to end their offensive possessions
with a basket or a trip the line. The Eagles grabbed 21 offensive boards in their 11 point win
against the Eastern Mavericks. Forestville turned those 21 O-boards into 18 second-chance
points and got to the line 12 more times than the Mavericks. Crashing the boards and getting to
the line is what helped the Eagles to get over the line in a low scoring match.
Warriors Playlist: Bloc Party
The new St. Clair stadium got off to a winning start and also looked to have set the music for the
season. The Warriors had a team total of 11 blocks in the win against the Lions and dominated
the boards outrebounding the Lions 48 to 39 which included 19 offensive boards. The Warriors
converted their rebounds as they proceeded to score 23 second-chance points. Katherine
Perkas led the way as she shot 50% from the field for 19 points and grabbed seven rebounds.
New Season, New Panthers
Mollie McKendrick and Brianti Saunders had a great start to the new season as they led the
Panthers to a 15 point win over the Norwood Flames. McKendrick and Saunders finished with
26 and 21 points respectively. Saunders herself had a great game as she ended with ten
rebounds, five steals and three assists. McKendrick was no slouch on the boards as she
finished with eight boards herself.

Water Under the Bridge
Any thoughts of history between the Warriors and Luke Stanbridge appears to be all water under the bridge as the club legend made his first 2019 season appearance in Warriors colours. Stanbridge posted his first of most likely many double-doubles after notching 19-points (50% FG) from the floor and ripping down 11-rebounds. Stanbridge stepping up will be a huge factor in any Warrior success this season.

Norwood are Red Hot
The always dangerous Norwood Flames have made a mark this opening round after already having 2 blowout victories under their belt. After beating the Sturt Sabres on Saturday night, the Flames continued their dominance on the road against the Panthers. League veteran Matthew Lycett and the sharpshooting James Legan put on a shooting clinic in both fixtures after dropping 21-apiece Saturday night and 29-24 respectively the very next day. By beating these clubs by a combined margin of 50-points, other sides have already been put on notice to bring their a-game as the season unfolds.

This season is going to be a close one!
Round One saw all of its fixtures bar 2 result in emphatic victories, this season may just go down to the wire. After 1-round, many clubs will still have much to prove including the StateTechnics and Akorin Business and Home Finance Solutions Premier League debutants the Mount Gambier Pioneers. With many sides still finding their feet for their 2019 campaign, where on the #leaagueofourown ladder will the new-comers sit?

Rockets’ Image in the Dictionary
If you search the term Debutant Destroyers, you may just find the North Adelaide Rockets logo after they downed the newly added Mount Gambier Pioneers. On paper, the Rockets have quite a versatile and dangerous list after the additions of Jack McVeigh, Bijan Johnson and Tobias Dowdell. Saturday night gave us our first glimpse of the combination which also included league-wide icon Alexander Starling. After showing plenty of heart on the floor, Mount Gambier fell in their debut to the hot Rockets 80-65.

Did the Eagles Perform a Rain Dance Before Round One?
If you couldn’t guess by the title, the Eagles made it rain in their first StateTechnics and Akorin Business and Home Finance Solutions Premier League fixture! Majok Deng and Brendan Teys combined for a phenomenal 56-points (26 and 30 respectively) while as a team, Forestville made 50 percent of their baskets. The Eagles’ dominance was displayed on the scoreboard with their largest lead reaching an incredible 43-points at one stage. It wasn’t entirely the Deng and Teys show as Jake Rios contributed 17-points off the bench and Kane De Wit with fourteen points and seven dimes of his own!

Sign up to recieve the new Hang Time program straight to your inbox!