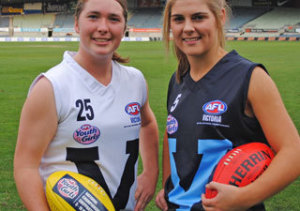 Follow @AFLVIC on Twitter to keep up to date with how the two Victorian teams are tracking at the Championships.

Victoria’s charge at next week’s AFL Youth Girls National Championships in Shepparton will be led by three remarkable young footballers.

Ellie Blackburn and Maddie Keryk have been appointed co-captains of a star-studded Victoria Metro outfit, while Vanessa Lewicki will lead Victoria Country into battle for the first time.

Victoria, playing as a combined Metro and Country side has won all three of the previous Youth Girls National Championships.

The Big V, despite being split into separate sides this year, is again expected to figure heavily when the medals are decided on Friday, needing to overcome Queensland, Western Australia, South Australia and NSW/ACT to secure a birth in the decider.

Blackburn, Keryk and Lewicki are no strangers to playing at the national level, having all represented Victoria on multiple occasions.

Blackburn, 18, heads into the Championships as one of the best Youth Girls footballers in the country after being named player of the carnival in 2011 and a vice-captain in 2012.

The powerful midfielder will be one of the keys to Vic Metro’s grand final aspirations and, with a ferocious attack on the ball, will most likely be the player other teams fear the most.

Keryk has her own long list of accolades, having represented Victoria at the championships for the past three years, including last year as captain.

The classy left-footer has spent the summer training with the Calder Cannons U18 boys team, and with her superior fitness, is expected to be one of the dominant on-ballers at the carnival.

“It’s a definitely a privilege to be named captain. It’s a very talented group of girls, so it’s very special,” Keryk said.

“We’re a pretty even side and our fitness and ability to win the contested ball will probably be our biggest strength at the championships.”

For Lewicki, the challenge is to lead a team of girls from every corner of Victoria, with the addition of five girls from Tasmania.

The reliable defender is rarely beaten in a one-on-one contest and her composure in the back half will be pivotal to Vic Country/Tasmania’s hopes of pinching a few wins.

“Having a Vic Country side, we’ve been able to include girls from regional and rural areas and entice more girls to be involved in the footy,” Lewicki said

“Being a captain of a team that has such great footballers, on and off the field, is a real honour.”

The Vic Country/Tasmania team opens its campaign under lights at Deakin Reserve against NSW/ACT on Monday at 5.20pm, while Victoria Metro tackles Queensland at 3.40pm.

For a full fixture and live scores during the championships visit http://www.aflcommunityclub.com.au/index.php?id=749

For live streaming of all matches visit http://www.aflvic.com.au/index.php?id=557

Updates will also be provided on twitter @AFLVIC or search #YGChamps