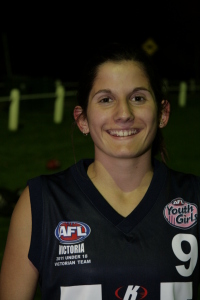 On Sunday, the 2011 Youth Girls Presentation Night was attended by over 230 guests at 501 Receptions in Footscray.

Over sixty awards were presented to girls from all over Victoria.

The night featured a fourteen-round vote count for the Western and Geelong Youth Girls Competition.

In Geelong it came down to the very last round as Matthew Flinders rising star Riley Shapter grabbed three votes in a best on ground performance to tie Barwon Heads’ premiership captain Tayla Rhodes on twenty-two votes.

Tayla and Riley shared the award ahead of Leopold graduating player Jaime Woollett who won Runner-Up with eighteen votes.

While in the Western competition Sunbury Captain Hannah De Raad ran away early to an astounding twenty-nine votes, finishing ahead of Victorian team Vice Captain Nicola Stevens of Pascoe Vale on twenty-three.

Victorian head coach Andrew Jago announced the second annual Eva-Peers medal, awarded to the best team player of the Victorian team, voted on by their peers and coaches.

Altona Junior Football Club were awarded the Western Youth Girls competition Best Conducted Club award with a perfect score. In 2011, they hosted a number of Western home games as well as establishing an under-12s team in the brand new junior girls competition. Team manager Kerrie Murphy announced that in 2012, Altona will be entering a team in the Victorian Women’s’ Football League.

Photos from the night soon to come…