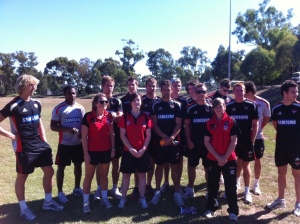 Graduates from the 2009 Youth Girls Academy squad, Jess Heath and Chloe Peers, and 2010 gradutate, Breeanna Gaylor, participated in school and community visits over two days in Bendigo. The culmination of the camp was a clinic for nearly 100 school girls, encouraging them to get involved in the game. With six teams having registered interest in the 2011 Bendigo Youth Girls competition and a new Bendigo women's team to debut in the Victorian Women's Football League thisy year, the timing of the girls' clinic was perfect.

Jess and Chloe, who are now senior players in the VWFL and are role models for younger players within the Youth Girls and VWFL competitions, benefited in learning about the additional responsibilities elite players have within the community.