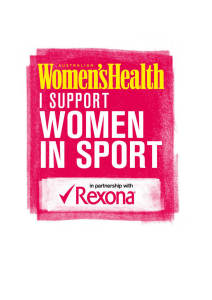 Women's Health Magazine will spend the next year campaiging for greater awareness of women in sport to encourage more girls and women to be active. The campaign, "I Support Women In Sport", will be partnered by Rexona and Channel Seven.

The campaign was officially revealed at a gala event at the Sydney Cricket Ground in January, attended by Her Excellency Ms Quentin Bryce, AC, Governor-General of the Commonwealth of Australia and Federal Sports Minister, Mark Arbib. A leading line-up of the country‟s most successful female and male sporting identities, including Liz Ellis, Jeff Fenech, Matthew Mitcham, Kerri Pottharst, Elka Graham, Lauryn Eagle, Jude Bolton and Lydia Lassila were also in attendance.

- At aged 10, 64.6 per cent of girls play organised sport; come age 35, it‟s a mere 12.8 per cent.
- Animals (horses and dogs) receive more media coverage than all of female sports (animals 14%; women 9%)
- Tickets to women‟s events at the London‟s 2012 Olympics have been priced well below the cost of their male counterparts – with some selling for less than half.

For more information on the campaign: isupportwomeninsport.com.au