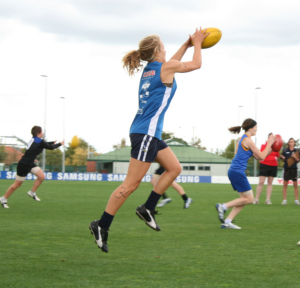 Selection trials for the Victorian Under 16 School Girls team were very competitive on Saturday at Windy Hill.

All-Australian Captain, Shannon McFerran, who will coach the team for the second year, put ninety-one players through a gruelling five hour selection process. The girls, who are aged 13-16, came from Omeo, Yarrawonga, Bendigo, Ballarat and Geelong, as well as all over metropolitan Melbourne.

Participating in the day were members of the Victorian Women's Football League's Academy in Meg Hutchins, Danni Teasdale and Cecilia McIntosh, whilst Youth Girls Academy members Georgia and Sarah Punton, and Alexandra Saundry were also on hand to help out.

The squad, which was cut to fifty three, will now participate in a trial match at 1pm on Saturday April 24 at Kings Park Reserve (Gillespie Rd, St Albans).

Players who have been asked to return for the second trial day are: