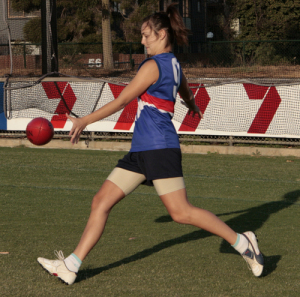 The Lindsay Gilbee Elite Kicking School was established in 2009 to provide additional kicking development for youth players aged 13-17. The program involves twelve hours of coaching and tuition over four sessions. Players are being coached on a variety of kicking techniques, using drills and coaching strategies used at AFL level.

AFL Victoria was able to provide two members of the 2009 Youth Girls Academy with the opportunity to fine tune their kicking skills in the first program. Representative players, Tess Butler and Nicola Stevens, are the first recipients of Lindsay Gilbee Elite Kicking School Youth Girls Academy scholarships. Below is a report from Nicola Stevens on her experience in the program.

By Nicola Stevens
Eight weeks ago, myself and Tess Butler were lucky enough to be given the opportunity to accept a scholarship to attend the Lindsay Gilbee Elite Kicking School. The program was open to both boys and girls aged 13-17, in the hope to improve the most important aspect of the game-kicking. Lindsay Gilbee, while playing for Western Bulldogs, along with various staff from the Western Bulldogs Football Club have worked together to give all their knowledge and skills of the game to us to help understand the importance of executing the correct kicking technique.

On the first training session, Tess Butler and I attended as representatives from the 2009 Youth Girls Academy, which was a daunting experience to begin with, although, we soon warmed up to the friendly boys attending the program. The first session began with an introduction by Linsday Gilbee, followed by a warm up and video analysis of our kicking techniques. Individually, each member of the program was asked to kick both preferred foot and non-preferred foot, on the run and from a standing start. It was the next session when we received the feedback from our video, and were shown the parts of our technique that needed improvement. The majority of the group needed to improve on:
- reducing the movement of the ball across the body while kicking on the run;
- having a firm foot on impact to gain more power in the kick; and,
- emphasising the non-guiding arm moving up, back and under to create more balance.

For myself, the main focus of my technique was to:
- strengthen my core stability to ensure my support leg doesn’t collapse on impact;
- more back extension in my leg to create more power and speed in my kick; and,
- to finish in a forward position to enable the next stride to occur almost immediately.

The training drills we performed during the program were ones that Lindsay and his teammates do frequently at the elite level to maintain the correct execution of the kicking technique. One of the training drills we performed was simple, yet it still involved putting into practice what we had learnt so far. The player was required to receive a handball from the coach, then had to run on and kick at the nominated hoop. This drill involved concentrating on executing the correct kicking technique, interpreting the information given to make a quick decision, and hitting the nominated target. Although the main focus was to improve the technique on our preferred kicking leg, we were also given the opportunity to improve our technique on our non-preferred foot.

As we were introduced to the types of kicks performed in AFL, the improvement over the whole group was evident. Between each training session we were asked to record in our diary what types of kicks we have practiced, how many times, and the feedback from our partner. The types of kicks which were our main focus were kick to self both sides, long kick, pole kick, one step quick release, kick to advantage, decision making kick and the trajectory/weighted kick.

In attending these training sessions and practicing what was taught in between, I have noticed significant improvement in my kicking technique already. By the end of the four sessions I hope to have further improved my kicking technique to make me the best possible player I can be. In being able to execute a kick almost every time will subsequently allow me to become more consistent in my kicking ability and game skills overall. The skills that I have acquired will certainly be beneficial to myself and my teammates as I will be able to bring my knowledge of the game to another level to improve the fundamentals within our team.  This opportunity myself and Tess Butler have been given is one definitely worthwhile and I have learnt things that I will remember throughout my football career.