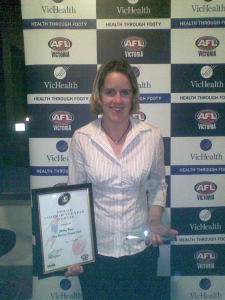 Shelley Beggs has many playing accolades to her name including 2009 and 2004 State player, 2003-2005 Victoria Metro player, and 2004 club best and fairest. However, on last month she received her first award as a coach in being named the AFL Victoria's Eastern Region 'Female Coach of the Year'. This is a fantastic achievement and one in which the East Burwood Devils are very proud of. Shelley, who was also named as the Rover in East Burwood's Team of the Decade, started her football coaching career only seven months ago when she excitedly took the opportunity to coach East Burwood's inaugural Youth girls side. She developed a good rapport with the young side and shared her knowledge and experience with the girls in a calm manner.  The girls had a lot of fun throughout the season and Shelley did a fantastic job with the side despite often only having minimum numbers to take the field.

As a regional winner Beggsy is now eligible to win the Victorian Female Coacho of the Year Award. East Burwood is very proud of her and wishes her all the best in her coaching in the future.