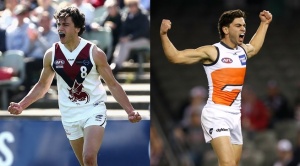 Having being selected by the Giants with pick no.2 in the 2016 NAB AFL Draft, Taranto has made an instant impact for one of the premiership favourites, playing seven matches since debuting in Round 1 and averaging 16 disposals and four tackles per game.

He averaged 27 disposals, seven marks and six tackles per game as well as kicking 14 goals in 10 total TAC Cup matches, seeing him earn selection in the TAC Cup Team of the Year.

Taranto also represented Vic Metro in its undefeated NAB AFL U18 Championships campaign last year, averaging 19 disposals and one goal per game across four matches and subsequently being named in the U18 All Australian team.